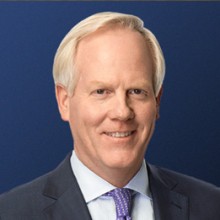 Tim McBride joined United Technologies Corp. in March 2015 as Senior Vice President, Government Relations. He leads UTC’s federal, state and international government relations activities, advises senior management on government relations matters and communicates the company’s business interests to key public policymakers and organizations. Previously, McBride served as Covidien’s Vice President for Global Government Affairs, directing state, federal and international government affairs for the company and a team of government relations professionals in Washington, Dublin and Tokyo. During 2009, he served as a consultant to a variety of companies in the telecommunications, manufacturing and homeland security sectors, providing advisory, business development, public relations, government relations and creative services. From 1993 to 2008, McBride worked for three Fortune 100 companies: Sunoco, Chrysler (later DaimlerChrysler) and Freddie Mac. He has provided strategic advice to senior management and corporate Boards of Directors, directed internal and external communications initiatives, and led international government-relations and industry-relations teams responsible for complex legislative and regulatory initiatives. From 1985 until 1993, McBride served in a number of senior government positions. Beginning in 1985, he was a member of George H.W. Bush’s Vice Presidential and Presidential staffs, serving as the President’s personal aide or private secretary for five years. In 1990, the United States Senate confirmed McBride as Assistant Secretary of Commerce for Trade Development, responsible for helping U.S. companies increase exports. In 1992, he returned to the White House to serve as Assistant to the President for Management and Administration, where he managed White House operations, including facilities, budget and personnel. His duties also included managing the White House Military Office, overseeing the continuity of government programs, Camp David, and the Marine One and Air Force One squadrons. Since 2003, he has traveled frequently to Afghanistan as a member of the U.S.-Afghan Women’s Council. He is the co-founder and Vice President of Ayenda Foundation, a U.S.-based nonprofit devoted to improving the lives and welfare of Afghan children. He also is a member of the Archdiocese of Washington Board of Education and serves on the Board of iCore Network Solutions, a VoIP startup, and the George H.W. Bush Presidential Museum & Library Advisory Board.​​​​​​​