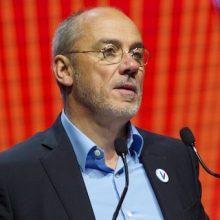 Stéphane Richard, born in 1961, has been Chairman and Chief Executive Officer of Orange SA since March 1, 2011.
He is Chairman of GSMA since January 2019.

He joined the Orange group in September 2009 and has successively occupied the positions of Deputy Managing Director in charge of French Operations, Delegate CEO and, starting on March 1, 2010, CEO. Between 1992 and 2003, Stéphane Richard was successively deputy to the CFO of Compagnie générale des eaux, CEO of Compagnie Immobilière Phénix and Chairman of CGIS (Compagnie générale d’immobilier et de services), now Nexity. From 2003 to 2007, he was Deputy Managing Director of Veolia Environnement and CEO of Veolia Transport, as well as being a director of Orange SA. From 2007 to 2009, Stéphane Richard was Chief of Staff to the French Minister for the Economy, Industry and Employment.

Stéphane Richard is a graduate of École des hautes étude commerciales (HEC) and École nationale d’administration (ENA). He is a Knight of the French Legion of Honor. He is a French national.