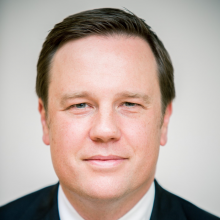 Mr. Weber is the Director-General of Interpeace, an independent, international peacebuilding organization and a strategic partner of the United Nations. With over 300 peacebuilders in 22 conflict zones across Africa, Asia, Europe, Latin America and the Middle East, Interpeace aims to strengthen the capacities of societies to manage conflict in non-violent ways. Originally created in 1994 within the United Nations, Interpeace also assists international leaders and the United Nations to play a more effective role in supporting peace efforts around the world. As Director-General, Mr. Weber provides strategic direction to the organization and oversees its operations, partnerships and budget. With headquarters in Geneva, Switzerland, Interpeace has regional offices in Guatemala City, Guatemala, for Latin America, in Nairobi, Kenya, for Eastern and Central Africa and in Abidjan, Côte d’Ivoire, for West Africa. The organization also has Representation Offices in New York and Brussels. Mr. Weber was appointed Director-General of Interpeace in 2005 by the then-Chairman (2000-2009) of the Interpeace Governing Council, 2008 Nobel Peace Prize laureate and former President of Finland, Martti Ahtisaari. Mr. Weber was renewed for a second term of 5 years in 2010 and an exceptional third term in 2015.
Mr. Weber was selected as a Young Global Leader by the World Economic Forum (WEF) in 2009. Each year the Forum recognizes “the 200 most distinguished young leaders below the age of 40 from around the world.”
Mr. Weber believes strongly in education as a means to shape young generations of global citizens and a more peaceful and inclusive world. In his spare time, he works with schools and universities to integrate Peace Education into their teaching practices and curricula. Mr. Weber is committed to diversity and inclusion and is an International Gender Champion providing leadership on gender equality in international affairs around the world. Mr. Weber is also a member of the Steering Committee of the Geneva Peacebuilding Platform (GPP), as well as of the Post-conflict and Peace Education Alliance of the Global Education and Skills Forum (GESF) hosted by the Varkey Foundation. Mr. Weber holds a Bachelor of Arts in International Relations, Economics and Russian from Georgetown University and Certificates of Executive Education in Leadership from Harvard University’s JFK School of Government and Oxford University’s Saïd Business School. Mr. Weber is French and American. He lives in France with his wife and two children.