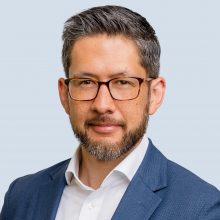 As Chief Growth Officer, Rob leads Village Capital’s growth initiatives across its innovations and partnerships teams, experimenting with Village Capital’s toolkit and methodology to explore new ways of supporting entrepreneurs and investors, in new markets and with new partners.

Rob joined Village Capital in 2017 after a decade at an emerging markets consultancy, where as the managing editor and head of research for Africa he led field studies on investment issues in a dozen frontier markets across the continent. Previously, he lived in the Middle East analyzing investment attractiveness in Kuwait, Jordan and Tunisia, and before that, worked on business and regulatory policy for the State of California and at a think tank in San Francisco.

He also serves on the board of Capital Area Asset Builders, a DC financial health nonprofit, and as an advisor to Asoko Insight, an Africa-focused data venture, and IssueVoter, a civic engagement platform. A Truman Security Fellow, he holds an MSc from the London School of Economics and a CEP from the Institut d’Etudes Politiques in Bordeaux, France. He received his BA from UC Berkeley.