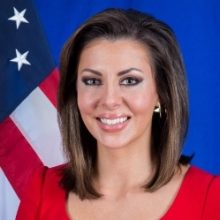 In her private sector experience, Ms. Ortagus helped found EY’s Geostrategic Business Group and she was a Global Relationship Manager at Standard Chartered Bank in the Public Sector Group covering clients in Africa, Asia, and the Middle East. She was also the co-founder and Managing Director of GO Advisors, and a national security contributor at Fox News.