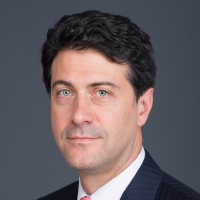 The Honorable Matthew McGuire is the United States Executive Director of the World Bank Group. He was nominated by President Obama and confirmed by the United States Senate, on June 15, 2015. As the U.S. Executive Director, he represents the United States as the largest shareholder on the executive boards of the World Bank Group institutions. Previously, Dr. McGuire served as Director of the Office of the Business Liaison at the U.S. Department of Commerce. In this capacity, he managed the Secretary’s relationships with business leaders globally, and he worked closely with policy making entities across the Obama Administration, including the National Economic Council, the National Security Council, and the President’s Council on Jobs and Competitiveness.

Prior to coming to Washington, DC, Dr. McGuire worked as a senior executive in the financial services industry, helping to build three dynamic and entrepreneurial firms in Chicago, IL. He has also run non-profit programs in the U.S. and abroad, focusing in particular on the fields of workforce development and affordable housing development. McGuire has been involved with various civic endeavors throughout his career, acting as a board member with number of not-for-profit organizations, including Public/Private Ventures, Chicago Public Media, and PeacePlayers International. He earned his Ph.D. in Anthropology from Harvard University and a BA from Brown University, as well as a Certificate of Religious Studies from the University of London.

Most importantly, he is married and has two remarkable daughters.