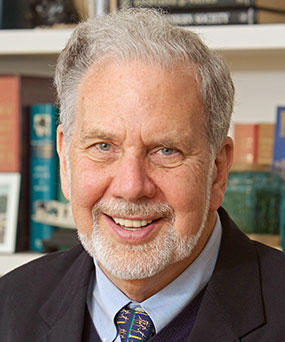 He is past Chair of the American Council on Education, the University of Rochester, the Commission on Independent Colleges and Universities of New York, and the New York Academy of Sciences. While Dean of the Law School, he was President of the Association of American Law Schools.

He served as the Chairman of the Board of the Federal Reserve Bank of New York (2003-2006) and Chair of the Federal Reserve Systems Council of Chairs (2006). He served as a board member of the National Association of Securities Dealers (1996-1998) and was Founding Chair of the Board of NASD Dispute Resolution (2000-2002). He served as co-chair of the UK/US Study Group, an education policy group convened by Prime Minister Gordon Brown, and was a member of the Public Policy Research’s Commission on the Future of Higher Education (UK), which issued its report in June 2013. In Spring 2016 he served as the Kluge Distinguished Professor at the Library of Congress.

In July 2008 he was named as Chevalier de la Légion d’Honneur, the national order of the Legion of Honor of France. In March 2015, he received the TIAA-CREF Hesburgh Award for Leadership Excellence, recognizing outstanding leadership on the part of a college or university president or chancellor. In 2012, he received the NASPA President’s Award, which is given annually to a college or university leader who has, over a sustained period of time, advanced the quality of student life on campus by supporting student affairs staff and programs. In 2014, the Institute for International Education awarded him its Dugan Prize for “distinguished work in education.”

In 2016, Commonweal Magazine honored Sexton as the Catholic in the Public Square. The previous year, the Arab-American League awarded him its Khalil Gibran Spirit of Humanity Award; and the Open University of Israel gave him it’s Alon Prize for “inspired leadership in the field of education.” In 2013, Citizens Union designated him as “an outstanding leader who enhances the value of New York City.”

He holds 21 honorary degrees from colleges and universities in the United States and Europe. The student editors of NYU’s Annual Survey of American Law dedicated their Volume 60 to him. He has been honored at the Harvard Law Review Annual Banquet, and has been named “Alumnus of the Year” both at Fordham University and at his high school, Brooklyn Prep. In 2008 he was named a Chevalier de la Légion d’Honneur, the national order of the Legion of Honor of France. Emory University has named him “Outstanding High School Debate Coach of the Last 50 Years” for work he did from 1960-1975

He is an author of a leading casebook on Civil Procedure. He also is the author of Redefining the Supreme Court’s Role: A Theory of Managing the Federal Court System (a treatment of the Supreme Court’s case selection process) in addition to several other books, numerous chapters, articles and Supreme Court briefs. His latest book is Standing for Reason. His 2013 book, Baseball as a Road to God: Seeing Beyond the Game, is based on an undergraduate seminar President Sexton teaches at NYU each spring and was a New York Times bestseller. His latest book is Standing for Reason, which addresses broad trends in global civil society and higher education.

He holds honorary degrees from 22 universities. The student editors of NYU’s Annual Survey of American Law dedicated their Volume 60 in his honor. He was named by Emory University as “Outstanding High School Debate Coach of the Last 50 Years” for work he did from 1960-1975. He has been honored at the Harvard Law Review Annual Banquet, and has been named “Alumnus of the Year” both at Fordham and at his highschool, Brooklyn Prep.

Before coming to NYU, He served as Law Clerk to Chief Justice Warren Burger of the United States Supreme Court (1980-1981), and to Judges David Bazelon and Harold Leventhal of the United States Court of Appeals (1979-1980). For ten years (1983-1993), he served as Special Master Supervising Pretrial Proceedings in the Love Canal Litigation. From 1966-1975, he was a Professor of Religion at Saint Francis College in Brooklyn, the Department Chair from 1970-1975.

He married Lisa Goldberg in 1976. Their two children are Jed and Katie Sexton. And their grandchildren are Julia, Ava and Natalie.