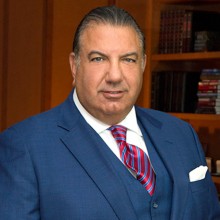 John Koudounis is Chief Executive Officer of Calamos Investments. Appointed to the role in 2016 by the firm’s founder, John Calamos, Mr. Koudounis brings a wealth of experience in global capital markets and is considered one of the most accomplished leaders in the financial services industry.

Prior to joining Calamos Investments, Mr. Koudounis served as President and Chief Executive Officer of Mizuho Securities USA, Inc. (MSUSA), a subsidiary of Mizuho Financial Group, one of the world’s largest full-service financial institutions. During his tenure at Mizuho Securities, he built the firm into a full-service investment bank, expanding its debt and equity capital markets teams. Under his leadership, the firm grew in profitability, number of clients, and product diversification, allowing Mizuho to be considered globally as a top tier investment bank. Prior to joining MSUSA in 2008, he was Managing Director and Head of Fixed Income for ABN AMRO Americas where he played a critical role in driving growth for the firm.

Mr. Koudounis is a regular featured speaker and guest on financial news programs, including CNN, Fox Business, CNBC, Bloomberg TV, TD Ameritrade, Yahoo Finance and others. He is a member of the Leadership Council of Concordia and the Bretton Woods Committee, as well as a founding board member and on the Executive Committee of The Hellenic Initiative, board member of the National Hellenic Museum, a Patron of Prince’s Trust and an Advisory Board Member of the SEAL Future Foundation. He received his B.A. in International Diplomacy & Foreign Affairs and Economics from Brown University.