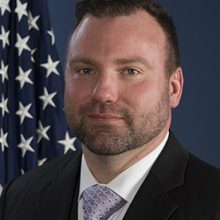 John B. DeVito began serving as the Special Agent in charge (SAC) of the New York Field Division of the Bureau of Alcohol, Tobacco, Firearms and Explosives (ATF) in January 2019.  He is responsible for ATF operations throughout the entire State of New York and is a member of the Senior Executive Service (SES). ATF is a key law enforcement agency within the U. S. Department of Justice that protects our communities from violent criminals, criminal organizations, the illegal use and trafficking of firearms, the illegal use and storage of explosives, acts of arson and bombings, acts of terrorism, and the illegal diversion of alcohol and tobacco products. The men and women of ATF perform the dual responsibilities of enforcing Federal criminal laws and regulating the firearms and explosives industries to protect against crime, violence, and other threats to public safety.   John has worked for ATF since 1997.  During this period, he has served in several posts of duty to include Miami, Washington DC, Virginia, New Jersey and now New York.  As a street agent in Miami, Florida, John was afforded the opportunity to work with many Federal, State, local and international law enforcement agencies investigating armed drug trafficking organizations, armed robberies of commercial businesses, carjacking, gang-related racketeering murder and firearms trafficking offenses.  He also served over 10 years as an operator on ATF’s Special Response Team (SRT 3 &amp; 5) assigned to the teams in Dallas, Texas and Miami, Florida.   In 2008, John became Deputy Team Commander for the ATF Special Response Team (SRT- Team 5). In this capacity, John supported Federal, State and local law enforcement with the planning and execution of high-risk enforcement operations across the nation.  In 2012, John was re-assigned to serve as the Group Supervisor for a violent crime task force covering Miami-Dade and Monroe County, Florida, and later in 2013, John was named as the Resident Agent in Charge of the Fort Lauderdale Field Office.   In 2014, John was transferred to ATF HQ in Washington, D.C. and served as the Chief of the Enforcement Support Branch within the Special Operations Division, and later, as Deputy Chief of the Firearms Operations Division (FOD) wherein he was tasked with oversight of the National Integrated Ballistics Information Network (NIBIN) and the Firearms Trafficking strategies and policies for ATF.   By June of 2016, John accepted the position of Assistant Special Agent in Charge of the Washington, D.C. Field Division, where he supervised ATF resources in the national capital region, Virginia and West Virginia.  From July 2017 to December 2018, John served as the Special Agent in Charge for the ATF Newark Field Division, with responsibility for a team of professional criminal &amp; regulatory investigators, intelligence analysts, as well as administrative staff across the State of New Jersey.   John was born and raised in Northern Alabama and attended the Virginia Military Institute and James Madison University.