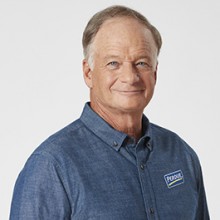 Jim Perdue has been the Chairman and advertising spokesman of Perdue Farms since 1991. He is the third generation of his family to lead the company, which was founded by his grandfather in 1920.

In 1983, Jim accepted the invitation from his father, Frank Perdue, to return to the family business. He worked various plant management jobs and was named Vice President of Quality Improvement after eight years.

Under Jim’s leadership, Perdue Foods has grown from an East Coast-centered premium fresh chicken label to a national roster of premium protein brands including turkey, pork, beef, and lamb. Perdue AgriBusiness has expanded from a regional grain and oilseed business to a multi-faceted international player. Jim has guided Perdue to become a leader in workplace safety and associate health, launching various innovative wellness programs. Jim’s commitment to earning consumer trust has led Perdue to become the first major poultry company to move all of its chicken to no-antibiotics-ever protocols. In 2016, Jim announced the company’s Commitments to Animal Care, a groundbreaking initiative that is transforming Perdue’s approach to raising chickens.

As Chairman, Jim is responsible for ensuring the company stays true to its vision and values, and continues to build on its strong corporate responsibility programs, especially in elevating animal care and strengthening farmer relationships.

Jim is a member of board of the National Chicken Council. He is active in the local community, serving on the boards of the Oyster Recovery Project and Salisbury University’s Perdue School of Business Shore Hatchery Entrepreneur Program.