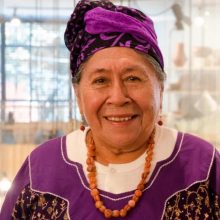 Iris Aguilar is a Wayúu Craft Master of the Ipuana clan, she comes from a generation of Ipuanas that are “Wayúu art artists”. Her mother is a great teacher, her grandmother was also a great teacher, and for generations, Iris grew up with her two families, her mother Ipuana and her father, Uriana. At the age of 7, she had the interest to knit, without any interest, but because she liked the daily work of the house, her mother and her aunt.

The Wayúu are an ethnic group that live in the north of Colombia in the department of La Guajira and in Venezuela, made up of some 600,000 individuals of which approximately 270,000 do so in Colombia.
At the age of 12 she lived far away, by the hill of the tile, and according to Wayúu customs, as she developed, the mother prepared her for Wayúu life, which is hard, for responsibilities and in art. Its preparation (confinement) lasted 2 years 8 months, with the mother and her aunt. He learned to weave, to spin, to take out the cotton to form the thread. At the end of the time, he studied at school to learn to read and write. She fell in love with Wayúu art. She is what she is thanks to her Wayúu training. “The Wayúu woman is the woman who has to be at the forefront of the good and the bad; When the difficult and stormy times come, the Wayúu woman must be ready “, her training in her culture prepared her for life.

Then she did her baccalaureate in Medellín, but she always had in mind being the person dedicated to the Wayúu fabric. She helped her brothers to educate themselves, she did not want to be the only one in the family that knew how to do it, so she saw for her brothers, so that they would not be able to work as day laborers. One was trained as a graduate in education, the other went to Venezuela to the military career. Those were his first achievements.

With Remedios Fajardo in the 80s, they found themselves with the idea of ​​being defenders of the Wayúu people, they made an indigenous organization called Yanama (work in common) there they worked for 13 years supporting intercultural bilingual education, she was the president of the association and also the crafts coordinator. There he was projected towards work with artisans.

Each design or Canaas belongs to a family, has a meaning and a philosophy, at that time, to learn from a teacher the meaning of each Canaan, had to pay the teacher with cattle. For that reason, not all women knew how to weave; Iris suffered to think that not all of them did it and that this art was lost, she wanted and dreamed that it would change.

The Canaas must be memorized, it requires a space where only the teacher and the apprentice have to be, it has to have concentration, patience and creativity. You have to understand mathematics, “pure mathematics”, “if you loose a thread, nothing has been done, you have to do it again from the beginning, you have to be very careful.”

He did not say anything to the people, but “the talanquera jumped”, always thinking about maintaining and propagating the art of Wayúu weaving.

The Wayuu woman has to feed her soul to concentrate, and understand the tissue, it is her internal process, her experience of understanding the wisdom of the Wayúu culture.  Without telling the others, she came to know the textile school of the Universidad de los Andes, she had a good relationship with the dean and she met Marta Ramírez. Always with the worry and pain that Wayuu art would disappear. She saw that very little people wanted to learn. She sought to transform the Wayuu canaas, apply it to the paper first, and then translate it into the crochet. The same designs of the funeral fabrics and the strips of man. The canaas are unique pieces. A person who has his hammock in canaas, has a unique and very valuable piece.
She is very happy to spread the fabric to the entire Wayuu population, so that women can live from the fabric.

Each canaas represents a story, it is a form of writing, which is transmitted in the Wayuu school, of its formation, of its history, of life …
One has to want to learn, fall in love with culture, I am proud to be Wayuu.

In the whole world there are indigenous people, in 96 I represented Colombia, I went to Bolivia. When I saw the weavings of Bolivia, Peru and Mexico, I returned in love, our art is very similar to the pieces of the museums in Bolivia, how nice it would be to have a museum of indigenous art history. Our art has a very strong meaning, a very big story.

Men also have their art, the implements of the horse and the donkey, which I boldly transform into the gaucho of the backpacks. I have made many pieces from the art of men.