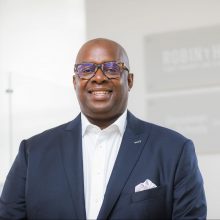 A first-generation, Panamanian American born and raised in the East New York neighborhood of Brooklyn, Richard R. Buery, Jr. has spent his career fighting to advance equal opportunities for families and communities often left behind. In September 2021, Richard became the CEO of Robin Hood, one of the nation’s leading anti-poverty organizations. At just 16 years old, Richard graduated from Stuyvesant High School and attended Harvard. He later earned a law degree from Yale and brought his talent and skills home to put them to work immediately. Most recently, Richard served as the CEO of Robin Hood’s community partner Achievement First, a network of 41 charter schools across New York, Connecticut, and Rhode Island. Richard has extensive experience as a leader, manager, and social innovator within local government, as well as New York’s vast social service nonprofit sector. As Deputy Mayor for Strategic Policy Initiatives for the City of New York, Richard was the key architect of the City’s Pre-K for All initiative, enabling 50,000 additional 4-years to get an early start on their education through a free, full-day program. He also launched Schools Out NYC, offering free after school programs to all NYC middle school students, stood up 200 new community school partnerships, and led the City’s effort to recruit 1,000 men of color to become public school teachers. Additionally, Richard launched the mental health reform initiative, ThriveNYC, and managed the City’s relationship with the 250,000 student City University of New York System (CUNY), stewarding significant investments that improved college persistence for NYC students. Richard also managed a range of city agencies, including the Departments of Probation, Aging, Youth and Community Development, People with Disabilities, and Immigrant Affairs, and created the New York City Children’s Cabinet, the Department of Veterans Affairs, and the Mayor’s Office of Minority and Women Business Enterprises. As a leader in the nonprofit sector, Richard has worked for or led four major nonprofits that are among Robin Hood’s grantees: the Brennan Center at NYU’s School of Law, KIPP, Children’s Aid, and Achievement First. Additionally, Richard founded Groundwork to support the educational aspirations of public housing residents in Brooklyn, and was cofounder of the national nonprofit, iMentor, which pairs high school students with mentors to help them navigate to and through college. Richard founded his first nonprofit at a Roxbury housing development while still in college. He was a teacher in Zimbabwe, a campaign manager to former Cambridge Mayor Ken Reeves, and clerked at the Federal Court of Appeals in New York. Today, Richard is a Public Service Fellow at the NYU Wagner Graduate School of Public Service, where he served as Distinguished Visiting Urbanist during the Spring of 2019. He is also a Senior Fellow at the GovLab at NYU, a partner at the Perception Institute, and a distinguished adjunct Professor at NYU’s Tandon School of Engineering. He serves on the board of the Kresge Foundation and is a Fellow of Pahara and the British American Project. A husband and father, Richard lives in Manhattan with his wife Deborah and their two sons.