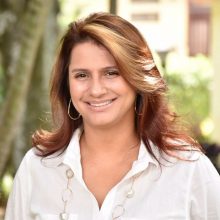 Paola Holguín (Medellín, 1973) is a Social Communicator-Journalist of the Universidad Pontificia Bolivariana, graduated from the Master in Political Studies with an emphasis in economics and development from the same university, graduated from the Master of Security and National Defense of the Higher School of War. She studied Security and Defense Policy and Strategy at the Center for Hemispheric Studies on Security and Defense (CHDS), the University of Defense in Washington and Terrorism and Counterinsurgency at the same center. For several years she was a teacher at the Pontificia Bolivariana and Eafit universities; international lecturer; she was advisor to the Presidency of the Republic of Colombia, during the government of former President Álvaro Uribe Vélez (2003-2008, 2009-2010); in charge of political affairs of the Embassy of Colombia in Mexico (2008-2009); USAID consultant on security and justice issues, for Merida initiative; Advisor to the Presidency of the United Mexican States, during the government of former President Felipe Calderón Hinojosa (2011-2012). Security consultant in Mexico and Argentina. She currently serves as Senator of the Republic of Colombia as part of the Democratic Center caucus.