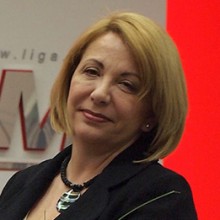 Kateryna Yushchenko is a former U.S. State Department official. She worked as a special assistant to the Assistant Secretary of State for Human Rights and Humanitarian Affairs. She holds a bachelor’s degree in International Economics from the Edmund A. Walsh School of Foreign Service at Georgetown University, and an MBA from the University of Chicago Graduate School of Business.

Yushchenko later worked in the White House in the Office of Public Liaison during the administration of Ronald Reagan. Subsequently, she worked at the U.S. Treasury in the executive secretary’s office during the administration of George H. W. Bush. After leaving that position, she was on the staff of the Joint Economic Committee of the United States Congress. After Ukraine declared its freedom, Yushchenko was a co-founder and the vice-president of Ukraine-USA Foundation. She was also the director of Pylyp Orlyk Institute. In 1993, she joined KPMG Peat Marwick/Barents Group as a consultant in its Bank Training Program and Country Manager, where she met Viktor Yushchenko, whom she subsequently married. She left her job in August 2000, when she was expecting her second child.

Yushchenko is now involved in numerous charitable projects with the Ukraine 3000 International Foundation that she chairs. The key priority of the Foundation is better health for Ukraine’s children. On the Supervisory Board of Ukraine 3000 Foundation, established in 2001, are some of Ukraine’s most prominent educational, humanitarian, cultural, literary and sports figures. President Victor Yushchenko served as Chairman of the Supervisory Council until his inauguration in 2005. Since then, its Chairman is Katherine Yushchenko. All programs and projects of the Foundation are implemented within three major areas: “Ukraine Yesterday”, “Ukraine Today” and “Ukraine Tomorrow”. The biggest projects of the Foundation are the “Hospital to Hospital” program, the construction and support of the “Children’s Hospital of the Future” and “The Joy of Childhood – Free Movements” program.