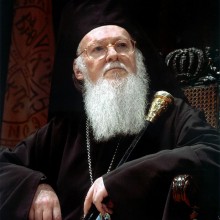 The Ecumenical Patriarchate is the foremost ecclesiastical center of the Orthodox Church throughout the world, tracing its history to the Day of Pentecost and the early Christian communities founded by the Apostles of Jesus Christ. According to tradition, the “First-Called” of these Apostles, Andrew, preached the Gospel around Asia Minor, the Black Sea, Thrace and Achaia, where he was martyred. In 36 AD, he founded the Church on the shores of the Bosporus in the city known then as Byzantium, later Constantinople and today Istanbul. St. Andrew is the Patron Saint of the Ecumenical Patriarchate; his Patronal Feast is celebrated on November 30.

The title “Ecumenical Patriarch” dates to the sixth century and historically belongs to the Archbishop of Constantinople. As Archbishop of Constantinople-New Rome, Ecumenical Patriarch Bartholomew occupies the First Throne of the worldwide Orthodox Christian Church, presiding in historical honor and fraternal spirit as “first among equals” of all Orthodox Primates. These include the ancient Patriarchates of Alexandria, Antioch and Jerusalem, as well as the more recent Patriarchates of Moscow, Serbia, Romania, Bulgaria and Georgia. Beyond these, the Ecumenical Patriarch has the historical and theological responsibility to initiate and coordinate common activity among the Orthodox Churches of Cyprus, Greece, Poland, Albania, the Czech Lands and Slovakia, Finland, Estonia, as well as various Archdioceses and numerous Metropolitan dioceses throughout the world, such as in Europe, America and Australia. Moreover, he is responsible for convening pan-Orthodox councils or meetings, facilitating inter-church and inter-faith dialogues, while serving as the focal point and primary spokesman for Orthodox Church unity as a whole. Transcending national and ethnic borders, the Ecumenical Patriarch is spiritual leader to 300 million Orthodox Christians worldwide.

Born Demetrios Archondonis in 1940 on the island of Imvros (today, Gökçeada, Turkey), His All-Holiness Bartholomew was elected in October 1991 as the 270th Archbishop of the 2000-year-old Church founded by St. Andrew, serving as Archbishop of Constantinople-New Rome and Ecumenical Patriarch.

The personal experience and theological formation of the Ecumenical Patriarch provide him with a unique perspective on ecumenical relations and environmental issues. His All-Holiness has worked tirelessly for reconciliation among Christian Churches and acquired an international reputation for raising ecological awareness on a global level.

The role of the Ecumenical Patriarch as the primary spiritual leader of the Orthodox Christian world and transnational figure of global significance continues to prove increasingly vital. His All-Holiness has co-sponsored international peace conferences, as well as meetings on the subjects of racism and fundamentalism, bringing together Jews, Christians and Muslims for the purpose of generating greater cooperation and mutual understanding.

Ecumenical Patriarch Bartholomew‘s tenure has been characterized by inter-Orthodox cooperation, inter-Christian and inter-religious dialogue. He has exchanged numerous invitations with Church and State dignitaries. His efforts to promote religious freedom and human rights, his initiatives to advance religious tolerance among the world’s religions, together with his work toward international peace and environmental protection have justly placed him at the forefront of global visionaries, peacemakers and bridge-builders as an apostle of love, peace and reconciliation.