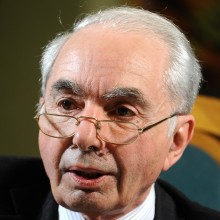 Member of the Italian Parliament for 18 years, he was Under Secretary to the Prime Minister’s Office, Minister for the Treasury, Minister for Constitutional Reforms, Minister of Interior, Deputy Prime Minister and twice Prime Minister (in 1992/1993 and 2000/2001). He also headed the Italian Antitrust Authority from 1994 to 1997 and was Vice-President of the Convention on the Future of Europe (2002/2003) and Chairman of the International Commission on the Balkans, sponsored in 2005 by the Bosch Stiftung, the German Marshall Fund, the King Baudoin Fundation and the C.S. Foundation. He also chaired the Istituto della Enciclopedia Italiana (2009/2013), the S.Anna Superior School in Pisa and the Center for American Studies in Rome. Currently he is Judge of the Italian Constitutional Court, appointed by the President of the Republic on 12 September 2013. In 2002 he was elected Honorary Fellow of the American Academy of Arts and Sciences. He has written books and articles on the economy and public institutions, European antitrust, personal liberties, comparative government, European Integration and Humanities.