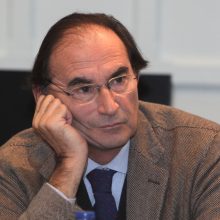 Emilio Lamo de Espinosa (Madrid, 1946) has a PhD in Law from the Complutense University of Madrid, a PhD in Sociology from the University of California-UCSB (1979) where he expanded his studies in the early 70’s, and has been Visiting Professor.

Since 2012 he is President of the Elcano Royal Institute, Professor Emeritus of Sociology at the Complutense University, Full Member of the Royal Academy of Moral and Political Sciences and of the European Academy of Sciences and Arts, member of the Advisory Council of the Center for Sociological Research , regular contributor to the press, and patron or adviser to numerous foundations (Spain-United States Council Foundation, Carolina Foundation, Spanish Political Transition Foundation, Fernando Pombo Foundation, Prince of Girona Foundation and Botín Foundation).

He was in charge of the reform of the Spanish University during the first socialist government of Felipe González (1982-1987), task for which he was awarded the Grand Cross of Alfonso X the Wise and the degree of Officier de l’Ordre des Palmes Academiques for services to French culture.

For almost ten years (1992-2002) he was Director of the Ortega y Gasset University Institute, the largest postgraduate center in social sciences in Spain. From 2002 to 2005 he was commissioned, as Director, of the foundation of the Elcano Royal Institute of International and Strategic Studies, the first Spanish think tank in international studies. Between 2007 and 2010 he was President of the Spanish Federation of Sociology, of which he is an Honorary Member.

He is Doctor Honoris Causa by the University of Salamanca, XI Otto Hapsburg Prize (2014), National Prize of Sociology and Political Science (2017), XXVII FIES Award for Journalism and Julián Marías Prize of the Community of Madrid (2018), among others acknowledgments.

He has published twenty-two books, more than a hundred scientific monographs, and almost 400 press articles or dissemination.