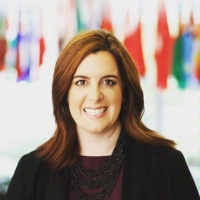 Elizabeth Fitzsimmons, a career member of the Senior Foreign Service, class of Minister Counselor, has served as Deputy Assistant Secretary of State since October 1, 2018. She was previously the Acting Deputy Spokesperson for the Department from March to August 2018. Prior assignments include Deputy Executive Secretary to Secretaries Kerry and Tillerson from May 2016 to October 2017, Senior Advisor at the Foreign Service Institute from October 2017 to March 2018, and Deputy Assistant Secretary for Public Diplomacy in the Bureau of South and Central Asian Affairs and the Office of the Special Representative for Afghanistan and Pakistan from August 2015 until May 2016. She joined the Department in 1995, and at the time of her swearing in was the youngest member of the Foreign Service. She has served overseas in Taiwan, Hong Kong, Cambodia, India, and Bulgaria. Domestically, she has worked in the State Department Operations Center as a Senior Watch Officer, and as Deputy Director of the State Department’s Executive Secretariat.

Elizabeth holds a BA from the University of Virginia in East Asian studies and a certificate from the International Division at Waseda University in Tokyo. She speaks French, Mandarin Chinese, and Bulgarian. In 2009, she was named a Fellow by the International Women’s Forum, one of only 25 women in the world to be so honored.