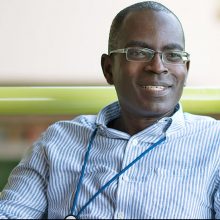 Patrick Awuah is the Founder and President of Ashesi University College, a private, not-for-profit institution that has quickly gained a reputation for innovation and quality education in Ghana.

In 2012, Ashesi University was ranked as one of the top ten Most Respected Companies in Ghana, and was the first educational institution to win the award. In the same survey, Patrick Awuah was named the 4th Most Respected CEO in Ghana.

Before founding Ashesi University, Patrick worked as a Program Manager for Microsoft where, among other things, he spearheaded the development of dial-up internet working technologies and gained a reputation for bringing difficult projects to completion.

He has won many prestigious international awards including the MacArthur Fellowship; the McNulty Prize; Membership of the Order of the Volta — one of Ghana’s highest awards, given to individuals who exemplify the ideal of service to the country, and the World Innovation Summit for Education Prize. In 2015, Patrick was named one of the World’s 50 Greatest Leaders by Fortune, and received the Elise and Walter A. Haas International Award, given to UC Berkeley alumni with distinguished records of service to their countries.

Patrick served on the Advisory Committee on Voluntary Foreign Aid (ACVFA) of the U.S. Agency for International Development from 2010 to 2016. He is a Fellow of the Africa Leadership Initiative of the Aspen Global Leadership Network; a member of the Council on Foreign Relations; and a member of the Tau Beta Pi honor society for excellence in engineering.