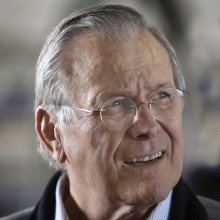 Secretary Rumsfeld had directed the actions of the Defense Department in response to the terrorist attacks on September 11, 2001. Thus far, the Global War on Terror has resulted in the liberation of 25 million Afghanis and 27 million Iraqis, with free elections in both of those nations. Two-thirds of known Al Qaeda leaders have been captured or killed.

The war is being waged against a backdrop of major change within the Department of Defense. The department has developed a new defense strategy and replaced the old model for sizing forces with a newer approach more relevant to the 21st century. Secretary Rumsfeld proposed and the President approved a significant reorganization of the worldwide defense command structure, known as the Unified Command Plan, which resulted in the establishment of the U.S. Northern Command and the U.S. Strategic Command, the latter charged with the responsibilities formerly held by the Strategic and Space Commands which were disestablished. U.S. special operations forces have been expanded and the conduct of special operations has been more closely integrated into contingency planning. He has also initiated a global restructuring of U.S. forces to better reflect the realities of the post-Cold War period, including significant shifts of forces from Europe and the Korean peninsula. The Department of Defense has developed a new model for civil service, known as the National Security Personnel System. Additionally, Secretary Rumsfeld will oversee what could be the largest round of base readjustments in U.S. history, ensuring that scarce resources are available for needed combat capabilities.

Mr. Rumsfeld attended Princeton University on academic and NROTC scholarships (A.B., 1954) and served in the U.S. Navy (1954-57) as an aviator and flight instructor. In 1957, he transferred to the Ready Reserve and continued his Naval service in flying and administrative assignments as a drilling reservist until 1975. He transferred to the Standby Reserve when he became Secretary of Defense in 1975 and to the Retired Reserve with the rank of Captain in 1989.

Mr. Rumsfeld resigned from Congress in 1969 during his fourth term to join the President’s Cabinet. From 1969 to 1970, he served as Director of the Office of Economic Opportunity and Assistant to the President. From 1971 to 1972, he was Counsellor to the President and Director of the Economic Stabilization Program. In 1973, he left Washington, DC, to serve as U.S. Ambassador to the North Atlantic Treaty Organization (NATO) in Brussels, Belgium (1973-1974).

In August 1974, he was called back to Washington, DC, to serve as Chairman of the transition to the Presidency of Gerald R. Ford. He later became Chief of Staff of the White House and a member of the President’s Cabinet (1974-1975). He served as the 13th U.S. Secretary of Defense, the youngest in the country’s history (1975-1977).

From 1977 to 1985 he served as Chief Executive Officer, President, and then Chairman of G.D. Searle & Co., a worldwide pharmaceutical company. The successful turnaround there earned him awards as the Outstanding Chief Executive Officer in the Pharmaceutical Industry from the Wall Street Transcript (1980) and Financial World (1981). From 1985 to 1990 he was in private business.

Before returning for his second tour as Secretary of Defense, Mr. Rumsfeld chaired the bipartisan U.S. Ballistic Missile Threat Commission, in 1998, and the U.S. Commission to Assess National Security Space Management and Organization, in 2000.