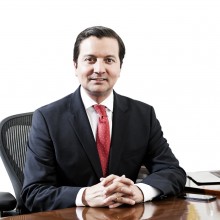 David Luna Sánchez, is a lawyer from Universidad del Rosario. He is a specialist in Administrative Law and has Masters in Government and Public Policies from Universidad del Externado in Colombia and from Columbia University from the United States. He has been president for the environmental organization Globe, “Capítulo Colombia.” Professor of various universities and author of the book, Starting Point: Nine Proposals for the Governance of Bogotá.

He began his public career as a leader of the community action board in the neighborhood. In 1997, he was elected Mayor of Chapinero. Then he was Councilman of Bogotá for two terms and was elected twice as the best city Councilman for the program Bogotá, Cómo Vamos. In 2006, he was elected into Congress with the highest votes in the country. During his term in Congress, he was chosen as the best House of Representatives of Colombia. In 2011, he ran for Mayor of Bogotá.

In December 2011, Luna was appointed Deputy Minister of Labour Relations. During this role, he executed important policies for the benefit of workers and employers in the country, including the conclusion of the minimum wage figure for the first time in five years; promoting telecommuting; issuing laws and labour inspections for the Occupational Hazards Decree; regulating collective bargaining in the public sector; and the reactivation of the Special Committee for the Handling of Conflicts referred to the ILO; among others.

On February 1, 2013 he resigned from the Vice Minister for Labor Relations to continue participating in the political construction of the country and the city through public debate. He became part of the workbench of the radio broadcast program, “La F.m. Radio” with Vicky Dávila and her team of journalists and “Alerta Bogotá” with Pacho Romero.

On September 27, 2013 he was appointed Presidential Advisor for Regions, where he supported President Juan Manuel Santos, by being in permanent contact with the 32 departments and more than 1,200 municipalities. Luna, was the voice of the government in the regions, and the ears of the President to the concerns of citizens.