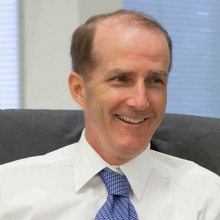 David is the senior operating executive to Pegasus, a New York City-based private equity firm focused on investment in sustainability. As part of his responsibilities at Pegasus, David is a member of the Board of Directors of Lighting Science Group, a leader in the merging field of biological lighting, and is chairman of Impala Holdings, a U.K-domiciled company focused on renewables development in Africa.

Prior to Pegasus, David Crane was CEO of NRG, which he joined in 2003 when it was in Chapter 11 bankruptcy. He grew it over his 12-year tenure to be a Fortune 200 company, engaged in conventional power generation and, after the acquisition of Reliant in 2009, in competitive retail electricity services. David pioneered the yieldco asset class with the IPO of NRG Yield in July 2013. David also led NRG to the forefront of next-generation clean energy development as one of the nation’s largest utility scale renewables company, a top four home solar business, the owner of the world’s largest post combustion carbon capture project and the nation’s most extensive level 3 electric vehicle charging network.

Prior to NRG, David was president and chief executive officer of International Power Plc, a London-based FTSE 100 company, which developed, owned and operated power plants in fourteen countries

David is a leading voice on climate change and the energy sector’s role in reducing greenhouse gas emissions having written extensively and spoken widely on the topic, recently as editor at large for greenbiz.com. He was an active member of the U.S. Climate Action Partnership from 2008 to 2011 and today is a B Team leader, where he heads the net zero initiative, and member of the World Business Council for Sustainable Development, and a Board member of Dean Kamen’s FIRST robotics competition and of ACWA, the leading private infrastructure company focused on the Middle East.

David was named Energy Industry “CEO of the Year” by EnergyBiz in 2010, top CEO in the electric utility sector by Institutional Investor in 2011 and “Entrepreneur of the Year” by Ernst & Young in 2010. David was also awarded the Corporate Environmental Leadership award by GlobalGreen in 2014 and the Equinox Solar Champion Award and most recently The C.K. Prahalad Award for Global Sustainability Business Leadership in 2015.