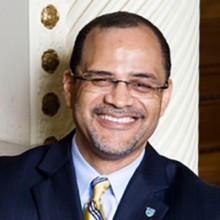 As President and CEO, David is responsible for the successful leadership and management of the Eagle Academy Foundation, which is charged with providing financial support for the academic enrichment programs at the Eagle Academy schools, offering professional development services to educators and administrators that want to effectively engage and teach inner city young men and the expansion and replication of the Eagle model.

Prior to becoming President and CEO of the Eagle Academy Foundation, David was the founding principal of the first Eagle Academy in the Bronx, NY. Preceding this, he served as the founding principal of the Bronx School for Law, Government and Justice, a theme-based high school that provided a unique opportunity to David to combine law and education background.

David is a graduate of Rutgers University in New Brunswick, NJ and received hi Juris Doctorate from St. John’s University. He earned his Education, Administration and Supervision certification by attending Brooklyn College, City College and Baruch College in NYC, simultaneously.