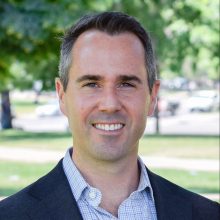 Dan Baer is the executive director of the Colorado Department of Higher Education and
a Diplomatic Fellow at the University of Denver’s Josef Korbel School of International
Studies. He was U.S. ambassador to the Organization for Security and Cooperation in
Europe from 2013 to 2017. He previously served as a Deputy Assistant Secretary of
State for Democracy, Human Rights, and Labor from 2009-2013. Baer was an assistant
professor at Georgetown’s McDonough School of Business, a Faculty Fellow at
Harvard’s Safra Center for Ethics, and a project leader at The Boston Consulting Group.
He has appeared on CNN, Fox, MSNBC, BBC, PBS Frontline, Al Jazeera, Sky, and The
Colbert Report and his writing has appeared in The Washington Post, The Wall Street
Journal, USA Today, Foreign Affairs, Politico, The Christian Science Monitor, Foreign
Policy, The Chronicle of Higher Education, Westword, The Denver Post, and other
publications. He holds a doctorate in International Relations from Oxford, where he was
a Marshall Scholar, and a degree in Social Studies and African American Studies from
Harvard. He lives in his native Colorado with his husband, Brian.