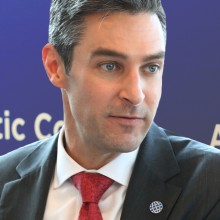 Damon Wilson is executive vice president of the Atlantic Council, serving as both a thought leader and manager with responsibility for strategy and strategic initiatives, program development and integration, and institutional development and organizational effectiveness. His work is committed to advancing a Europe whole, free, and at peace to include Europe’s East, the Western Balkans, and the Black Sea region; to strengthening the NATO Alliance; and to fostering a transatlantic partnership capable of tackling global challenges and promoting its common values. His areas of expertise include NATO, transatlantic relations, Central and Eastern Europe, and national security issues.

From 2007 to 2009, Wilson served as special assistant to the President and senior director for european affairs at the National Security Council. He played a leading role in developing and coordinating US government efforts to work with Europe on global challenges. He managed interagency policy on NATO, the European Union, Georgia, Ukraine, the Balkans, Eurasian energy security, and Turkey, and planned numerous presidential visits to Europe, including US-European Union and NATO summits.

Previously, Wilson served at the US embassy in Baghdad as the executive secretary and chief of staff, where he helped manage one of the largest US embassies, implementing a reorganization plan that strengthened coordination, accountability, and effectiveness, and played a key role in overseeing the embassy’s effort to design and implement a civilian surge throughout Iraq. Prior to this posting, he worked at the National Security Council as the director for Central, Eastern, and Northern European affairs from 2004 to 2006. During this time, Wilson strengthened ties with the German Chancellery, coordinated interagency policy in support of reform in Ukraine, directed efforts to deepen engagement with America’s allies in Central and Eastern Europe—including beginning the expansion of more secure visa-free travel—and promoted close consultations with coalition partners in Iraq and Afghanistan.

From 2001 to 2004, Wilson served as deputy director of the Private Office of the NATO Secretary General, assisting Lord George Robertson in his drive to transform the Alliance by enlarging NATO membership, conducting operations beyond Europe particularly in Afghanistan, and adapting Allied capabilities to face modern threats. Wilson also supported the Secretary General’s role in the successful effort to avert civil war in Macedonia. Prior to serving in Brussels, Wilson worked in the US Department of State’s Office of European Security and Political Affairs, where he was responsible for cooperation with NATO Allies on missile defense, nuclear policy, and preventing the spread of weapons of mass destruction. He also worked on the State Department’s China desk and at the US embassy in Beijing as a presidential management fellow. Wilson began his service at the State Department by helping coordinate policy to adapt NATO to modern security challenges and planning for the Alliance’s 50th anniversary summit in Washington during the Kosovo conflict.

Wilson completed his master’s degree at Princeton University’s Woodrow Wilson School for Public and International Affairs, where he also taught an undergraduate policy workshop on implementing NATO expansion. As a graduate student in 1997, he worked in the African Affairs Directorate of the National Security Council concentrating on Central Africa. From 1995 to 1996, he served as the first hart leadership fellow, working in Rwanda as a project officer for Save the Children’s Children and War Program. As a Benjamin N. Duke leadership scholar at Duke University, Wilson obtained his BA summa cum laude in political science. He also studied at the University of Grenoble, France, conducted independent research on democracy in Estonia, and worked for the Unaccompanied Children in Exile refugee program in Croatia and Turkey.

Wilson speaks French and has been decorated by the Presidents of Estonia Georgia, Hungary, Latvia, and Poland for his efforts to advance transatlantic relations. He also serves as a senior adviser to the US-Ukraine Business Council; is a member of Commander, US European Command; serves on the international advisory board to the Slovak Atlantic Commission; and has lectured at George Washington University.