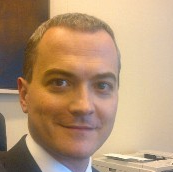 Prior to this appointment, Mr Perrin was Director, Department of Official Meetings, Documentation and Relations from 2012 to 2016; and Chief, Official Relations Branch from 2010 to 2012.

From 2003 to 2010, he was ILO Director-General’s Senior Adviser for Europe and Central Asia.

Before joining the ILO, Mr Perrin had several other professional experiences in the United Nations Secretariat; in the Office of the French Defense Minister; and in UNESCO Regional Office for Latin America and the Caribbean.

Born in 1968 in Lyon (France), Mr Perrin holds a DESS (post-graduate diploma) in Political Science and Development Cooperation from the University of Paris 1 (Panthéon-Sorbonne). He speaks French, English and Spanish fluently.