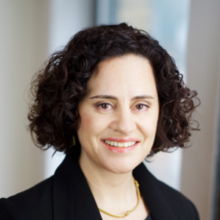 She previously served as Director of Policy and Advocacy at Merck for Mothers, where she led the Saving Mothers, Giving Life public-private partnership. Prior to Merck, Schocken was Director of International Organizations at Population Services International (PSI), where she managed PSI’s work with the Global Fund to Fight AIDS, Tuberculosis, and Malaria and other multilateral organizations. She has also served as Chief Advisor to the Rwandan Minister of State for HIV/AIDS and Other Epidemics, whom she assisted to draft national policies related to HIV/AIDS, and to coordinate the implementation of multi-million-dollar HIV/AIDS programs throughout the country.

Prior to her position with the Government of Rwanda, Schocken held positions as Country Director of Columbia University’s programs in Rwanda, and with the William J. Clinton Presidential Foundation, where she co-authored Rwanda’s national plan for HIV/AIDS treatment and care. In 2005, she was a fellow at the Council on Foreign Relations.