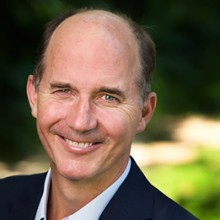 Carter Roberts is President and CEO of World Wildlife Fund in the United States. WWF, the world’s largest network of international conservation organizations, works across 100 countries and enjoys the support of 5 million members worldwide, 1.1 million of which are in the U.S.

Roberts leads WWF’s efforts to save the world’s great ecosystems by linking science, field and policy programs with an aggressive initiative to work with markets and businesses to lighten their impact on the planet through sustainable resource management. To this end, he has worked with communities and heads of state in North America, Africa, Latin America and Asia; and has built partnerships with some of the world’s largest corporations, including The Coca-Cola Company, Walmart and Mars to set new industry standards for resource efficiency.

Roberts earned his MBA from Harvard Business School following a BA from Princeton University, and subsequently held marketing management positions for Procter & Gamble and Gillette. He went on to lead international conservation and science programs for fifteen years at The Nature Conservancy before coming to WWF in 2004. He has authored academic papers as well as numerous opinion editorials for global publications ranging from Fast Company to The Washington Post to Conservation Letters.

Roberts serves on the Boards of the Nicholas Institute for Environmental Policy at Duke University and the Grantham Institute for Climate Change at Imperial College and the London School of Economics, and is a member of the Council on Foreign Relations and the International Finance Corporation’s Advisory Panel on Sustainability and Business. He also serves on the Advisory Board of the Sustainable Energy for All (SE4All) initiative chaired by the Secretary-General of the UN and the President of the World Bank, and President Obama’s Advisory Council on Wildlife Trafficking.

Roberts lives in Washington, D.C. with his wife Jackie Prince Roberts and their three children.