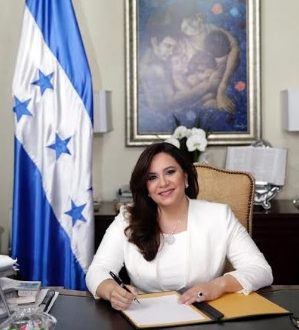 Ana Rosalinda Garcia Carías was born in the household formed by Doctor Jose Guillermo Garcia Castellanos and Ms. Carlota Carías Pizzati, on September 21, 1969 in the City of Tegucigalpa, Francisco Morazán. She completed her university studies at the Universidad Autónoma de Honduras (UNAH), graduating with academic excellence, obtaining a Bachelor´s Degree on Law and Social Sciences with orientation on Commercial Law in 1991. During her studies, she met Juan Orlando Hernandez, who became her husband in 1990. Together they have 3 children: Juan Orlando, Ana Daniela and Isabella.

Continuing her with professional goals side by side with her husband, they travelled to the United States of America to study their post-graduate degree in Public Sector Management at the University of Albany, New York, concluding their studies in 1995. In the year 2002 she passed the test to obtain her degree as Lawyer and Exequatur in Public Notary. Juan Orlando and Ana Hernandez, have performed various social work projects, especially in the Department of Lempira, in the western side of the country, where they have shown their solidarity and humanitarian side by helping the most in need. In 2006, they created the program “Vida Mejor (Better Life)”, which purpose is to help the poor, program which later would become a fundamental pillar in the success of their political future.

As wife of Lawyer Juan Orlando Hernandez, during the years he was elected President of the Honduran National Congress 2010-2014, she developed, managed and directed social projects through the Office of Social Development with the Program Vida Mejor (Better Life). Their most successful projects are: construction of cookstoves (model Justa) and the installation of cookstoves (model El Ahorrador), installation of water filters, supporting the creation of small businesses (microempresas) of tortillas and bakeries, donating digital classrooms to public schools, giving student scholarships and free English courses, as well as supporting women´s craft skills and personal growth. Other programs supported by Vida Mejor are: creating orchards, installing ceilings, floors and toilets to the poor. Currently, the majority of the programs are running through the Secretaria de Desarrollo e Inclusion Social.

As First Lady of the Country, through her Office, she leads and coordinates the institutions in charge of executing the social projects that are of great interest to the nation. One of the major programs she is supporting is “Teen Pregnancy Prevention”, where she articulates as leader and has achieved joining the state institutions, civil society and faith-based organizations to work in a harmonious way, in order to create a National Inter-Sectorial Plan on Teen Pregnancy Prevention. Besides working on teen pregnancy, she volunteers as part of the “Migrant Child Task Force” (Fuerza de Tarea del Niño Migrante)”, that aims to prevent irregular child migration. The task force is an inter-institucional committee that works with child migration and aids in the reintegration of returning migrants to their communities, especially children.

First Lady Ana Garcia believes supporting various issues in favor of Honduran women is an important task. The most recent Presidential program she is driving is “Women City” (Ciudad Mujer); this is a model of inclusive care for women 13 and older. At this time she is also working on other topics of interest such as supporting early childhood as High Voluntary Commissioner of the Comprehensive Care System, ” Criando Con Amor”, the elderly citizens with the presidential program ” Ciudadanos de Honra” and the disability sector with the program” Honduras Somos Todos”. She also handles other topics that promote art, culture, education 2.0 and supporting other modernization initiatives.