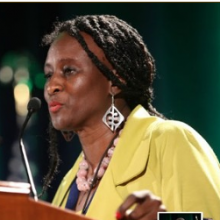 Ambassador (Dr.) Robin Renee Sanders served as one of the U.S. Government’s top diplomats on African issues over a long career in the United States Diplomatic Corps reaching senior positions ranging from Ambassador to the Republics of Nigeria, Republic of Congo, two stints – NSC Director for Africa at the White House, and U.S. Permanent Representative to the West African Regional Organization ECOWAS. Dr. Sanders received her doctor of science degree in information systems and communications from Pittsburgh’s Robert Morris University, where she also holds the title of Distinguished Public Service & Rooney Scholars, and she is a Gallup Senior Scientist with Gallup Poll. The Ambassador also holds MA and MS degrees from Ohio University; and, a BA from Hampton University. She is a recognized Africa Region thought-leader on subjects ranging from Africa’s trade, political, economic, development, and technology issues as well as US-Africa policy. Her work also focuses on both global and the Africa Region’s thematic topics such as the SDGs, food security, democracy/elections, education, technology, climate change, as well as the Africa Diaspora and assistance to SMEs. She has testified before the U.S. Congress on many of these topics.