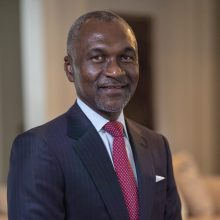 Mr. Alexander B. Cummings is a businessman, politician and philanthropist.

He is the Founder & Chairman of Cummings Investments Holdings, Ltd., Chairman of the Cummings Africa Foundation and Standard Bearer & Political Leader of the Alternative National Congress (ANC) in Liberia.

He began his professional business career in Liberia at the Liberian Bank for Development & Investment and subsequently with the Pillsbury Company where he rose to the position of Vice-President of Finance for all of Pillsbury’s international businesses. He has lived and worked in UK, the US, Nigeria, Kenya and South Africa.

Former Executive Vice President and Chief Administrative Officer of the Coca-Cola Company, Mr. Cummings joined Coca-Cola Company in 1997 where he worked for 19 years until his retirement in 2016. He began at Coca-Cola in Africa as Deputy Region Manager, Nigeria, Managing Director/Region Manager of Coca Cola, Nigeria, and President and Chief Operating Officer of the Coca Cola Africa Group, responsible for all of Coca-Cola Company’s operations in Africa, encompassing a total of 56 countries and territories across the continent. In 2008, Mr. Cummings was promoted to Executive Vice President and Chief Administrative Officer of the Coca-Cola Company, with consolidated oversight of key global corporate functions including Strategic Planning, Human Resources, Legal, Information Technology (IT), Strategic Security, Sustainability and all the Technical Functions including, Research and Development (R&D), Innovation, Quality, Procurement, Manufacturing, etc, across five (5) groups and 200 countries globally. He retired in 2016 and returned to Liberia to serve his country in business, politics and philanthropy.

As part of his philanthropy, the Cummings Africa Foundation has invested nearly $1M into health, education, entrepreneurship, and the arts and women and youth empowerment in Liberia. In 2015, Mr. Cummings received Liberia’s highest honor, the Humane Order of African Redemption, for humanitarian work in Liberia and acts supporting and assisting the Liberian nation and Africa.

His mentorship of emerging business leaders has helped create successful businesses such as Sundial Brands in the United States, J-PALM Inc in Liberia, amongst others. He is global player with a strong network of relationships with Heads of State, political leaders, global business leaders and philanthropists.

He currently serves on the boards of S.C. Johnson & Son, Inc. and until recently, C.A.R.E. and Clark Atlanta University (CAU) where until October 2016, he was the Chairman of the Board. He has also served on the boards of Chevron, The Coca-Cola Bottling Company Consolidated, International Bank (Liberia) Limited, Africa-America Institute, Africare, the Corporate Council on Africa, The African Presidential Archives & Research Center, and the Center for Global Development’s Commission on US Policy toward Low-Income Poorly Performing States (LIPPS). He was a member of the Executive Leadership Council (ELC).

He is a native of Liberia and married to his wife, Teresa Cummings for 38 years.