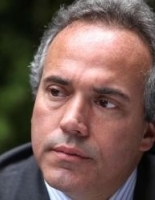 Alejandro Grisanti is the head of research and strategy for Latin America at Barclays Capital Inc. In 2005, he founded his own company, Ecoanalítica, which he directed until 2007. The company was an important source of information to understand the economy and politics of Venezuela. Prior to Ecoanalítica, Mr. Grisanti was the chief economist of Banco de Venezuela, Grupo Santander from 2000 to 2004. He has taught in the Universidad Católica Andrés Bello and at the Instituto de Estudios Superiores de Administración. Mr. Grisanti was a member of the Venezuelan American Chamber of Commerce and has served as a consultant for the Inter-American Development Bank. He has a Ph.D. in Economics from the University of Pennsylvania, a degree in economics from Universidad Católica Andrés Bello, and a degree in computer engineering from the Universidad Simón Bolívar.