By Cheryl He, Research Manager at Concordia

Making up more than 40% of the unemployed population in Latin America, youth unemployment has remained a h 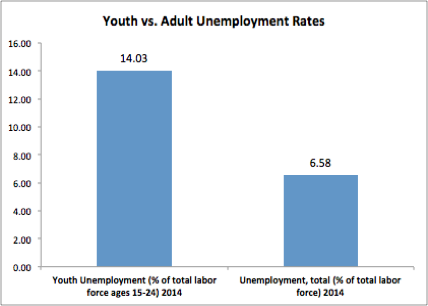 uge problem for the region over the past few years. With an unemployment rate of 14%, youths are more than twice as likely than adults to be unemployed. (See graph on right. Source: WB Indicators Databank)

Since the global financial crisis, shrunken markets are still struggling to return to previous levels, resulting in limited job opportunities for youths who find it increasingly difficult to enter the job market. As they search for ways to achieve self-reliance and financial independence, youths may find their way into the informal sector. A Brazilian study showed that youth unemployment and informality have effects on later adult labor market outcomes—youths who were exposed to higher levels of unemployment and informality fared systematically worse in the labor markets as adults. The result leads to a vicious cycle: large informal sectors mean less tax revenue for governments to invest in the infrastructure development necessary to support private sector growth and the creation of employment opportunities. A lack of private sector growth and employment opportunities perpetuates unemployment and informal markets, while hindering advancement in the region.

Entrepreneurship as a solution to reducing youth unemployment in the region

Governments have long known the strong ties between entrepreneurship and economic development: entrepreneurship provides a pathway for self-employment and entry into formal markets. Economies that support entrepreneurship create far more value and that value is more widely distributed than any other economy. According to the Multilateral Investment Fund (a member of the Inter-American Development Bank Group), small and medium enterprises (SMEs) are responsible for 66% of jobs worldwide, on average.

It is no wonder that the Concordia Partnership Index shows that factors that support SME growth such as the ease of starting a business, availability of adequate infrastructure (ICT, transport, and financial services infrastructure), access to credit, and access to higher education are strongly correlated with labor participation rates, particularly in youths. In other words, a conducive entrepreneurial environment or “ecosystem” enables job creation and reduces youth unemployment rates.

Current state of the entrepreneurial ecosystem in Latin America 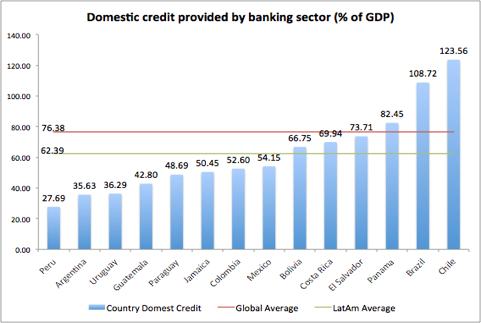 the world. Levels of domestic credit availability in the region are significantly below the global average, with Peru having among the lowest levels. Although funding SMEs at the early stage is 4 times more effective at generating innovation than other alternatives such as development funding and corporate research initiatives, and such innovation drives 85% of job growth, startups still often face a huge financing gap. Because startups have yet to prove their business models or break even, they are seen as too risky to attract capital, which limits their growth potential. Financial markets in the region are less mature, so banks are less inclined to finance startups. This is an opportunity for Latin American nations’ governments to direct capital to catalyze development and close their credit gaps. One such example is the Israeli government’s Yozma program in 1992, which offered attractive tax incentives to foreign venture-capital investments in Israel and doubled any investment with $100 million from the government. Venture-capital investments increased nearly 60-fold, from $58 million to $3.3 billion, between 1991 and 2000, and the number of companies launched using Israeli venture funds rose from 100 to 800. (Source: WB Indicator Databank) 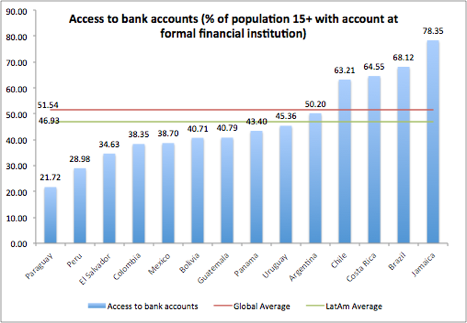 Financial exclusion also creates a barrier to entrepreneurship as bank accounts provide entrepreneurs with access to credit and loans required to start a business. According to the World Bank, about half of the population in the region is unbanked, with over 60% in Mexico and Colombia. The majority of Latin American countries fall starkly below the global average. Early stage funding is particularly important, because it is where availability is most scarce—most ventures don’t take off due to lack of early funding. (Source: Global Findex (Global Financial Inclusion Database)) 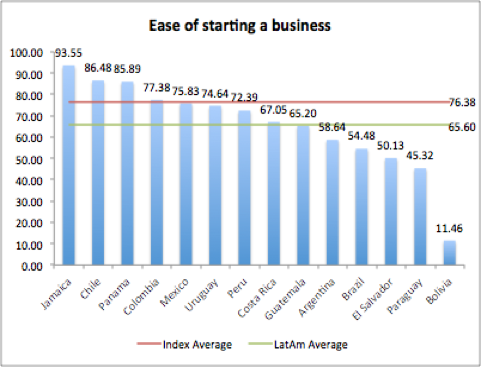 On average, starting a new venture in the region is more onerous and costly when compared to the rest of the 72 countries analyzed in the Partnership Index. Nonetheless, Jamaica, Chile, and Panama clearly outperform the region and rank among many European nations. Barriers such as extensive red tape and high costs of compliance make it difficult for entrepreneurs to create their own employment opportunities when jobs are limited. If governments want to develop a fertile environment for cultivating new companies, they have to be responsive and make the process easier. The Partnership Index can help governments evaluate whether they have a conducive entrepreneurial ecosystem and what policy reforms they should put in place, knowing that each country and city has its own unique resources and assets and all elements of the ecosystem are interdependent. (Source: The Concordia Partnership Index 2016. “Ease of starting a business” takes into account the cost of starting a business, number of days it takes to start a business, and the number of procedures to start a business. Indicators are sourced from WB Indicator Databank) 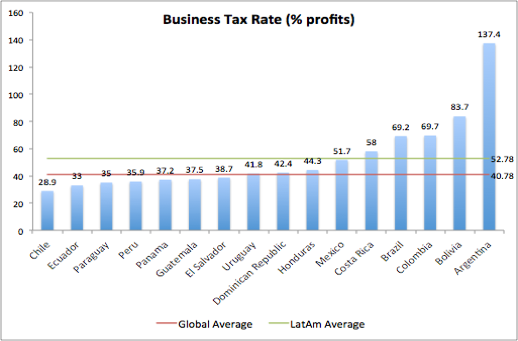 Moreover, startups in Latin America face higher business tax rates when compared to the rest of the world. Argentina’s tax rates stand at a staggering 137.4%, more than double the regional average, and more than 3 times that of the global mean. (Source: WB Indicator Databank)

All cities and countries are capable of creating a vibrant start-up scene by encouraging entrepreneurship through supporting innovation, access to capital, and developing know-how. According to D. Isenberg, Professor of Entrepreneurship Practice, an entrepreneurial ecosystem is made of private and public players, which nurture and sustain new ventures, making entrepreneurship easier. Elements that make up that ecosystem, he says, can be grouped into six categories: a culture of innovation; responsive regulatory policies; access and availability of credit; relevant human capital; large domestic market; and adequate institutional and infrastructural supports.

Isenberg also notes that to create this ecosystem, the private sector has to be engaged from the start. Governments alone cannot build this ecosystem, instead it must be collaboratively nurtured by bringing resources and expertise unique to each sector. While governments can legislate a business-friendly regulatory environment, only the private sector has the motivation and perspective to develop self-sustaining, profit-driven markets. Thus, governments must involve the private sector early and let it have a significant stake in the ecosystem’s success. Such public-private partnerships (P3s) provide a mechanism to pool resources for funding and supporting small businesses, allow for innovative solutions to challenges, and reduce and manage risk in the initial development stage of projects.

P3s, if managed well, are effective ways to bring together relevant actors in the public and private sectors to close credit gaps for early-stage funding, develop the right know-how through training and mentorship, and remove barriers to markets. For example, EY partnered with US embassies and local state governments across Latin America to implement TechCamps, a program aimed at fostering women’s entrepreneurship. Through the combined network across both the public and private sectors, this partnership provided entrepreneurs access to markets and capital, skills and technical knowledge, and leadership opportunities.

P3s also apply to the rest of the elements of a conducive entrepreneurial ecosystem. Adequate institutional and infrastructural supports such as ICT, transport, and financial services are necessary to support SME growth. Investing in education and healthcare infrastructure also helps develop valuable human capital, which support scaling of new enterprises and creates more job opportunities. However, infrastructure gaps in Latin America are larger than the average of 72 countries ranked in the Partnership Index, and are therefore in greater “need” to engage in P3s. In fact, Table 1 shows that more than half of the countries in the region have larger infrastructure gaps than the Index’s average across six sectors: Transport, ICT, Financial Services, Healthcare, Education, and Energy.

For many governments facing constrained resources and budget cuts, P3s have proven to be a cost-efficient means to close infrastructure gaps. The benefits of using a P3 model are not only felt by the public sector and citizens, as the private sector also makes a return on investments while having a large social impact on society. Thus, partnerships are a win-win solution to reducing barriers to entrepreneurship and employment.

For a country to attract private investments for P3s, it needs to have an enabling environment for partnership engagement. Strong political and market structures are associated with lower investment risk, and hence, make a country more “ready” to engage in P3s. Indicators of “readiness” include the availability of human capital, business-friendly regulations, availability of credit, political will for P3s, corruption levels, and other governance structures. 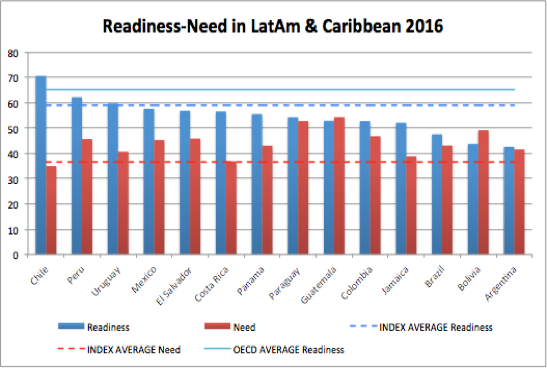 According to the Concordia Partnership Index, Chile followed by Peru and Uruguay are prime P3 environments. In fact, Chile and Peru rank first and fifth overall among the 72 countries analyzed in the Index. Notably, Chile’s “readiness” performs well above the Index average and OECD countries’ average. In fact, Chile’s strong political and market structures place its “readiness” among the likes of the US, Australia, and Switzerland. Argentina on the other hand, while it offers substantial opportunity for P3 investments, lags behind in “readiness” among its regional peers. Nonetheless, with the business-friendly administration under President Macri at the helm, potential improvements could be on the horizon. (Source: Concordia Partnership Index 2016)

Thus, an enabling P3 environment is not only important to investors or potential partners for but is also a powerful mechanism for creating a fertile environment for cultivating new companies.

Finally, while the government and the private sector can help support the ecosystem, entrepreneurs are ultimately the ones who can create a sustainable ecosystem. Every single initiative to create such an ecosystem that came from the government or large well-established corporations failed eventually. The lesson learnt here is to supply the ingredients and let the entrepreneurs produce their own culinary creations, and having the right P3 environment is necessary for their success.

This article was originally featured on Xcala.com