Why Is There a Disconnect Between Available Jobs and Qualified Employees?

The second installment of the Huffington Post three-part series is now available. View the data that supports the authors' contentions regarding the disconnect between the skills employers seek and the skill sets of the workforce.

On March 3, 2014,Peter Smirniotopoulos, founder and principal of petersgroup consulting and a contributor to The Huffington Post, and Natalie Pregibon, Director of P3 Intelligence published a Huffington Post article entitled, “Why Is There a Disconnect Between Available Jobs and Qualified Employees?” The article is the second in a series of three about the U.S. economy, the job readiness of the country’s labor force, and how public education could play a more-effective role in addressing the skills gap that keeps existing jobs from being filled.

The below graphs support the authors’ contentions in their Huffington Post article regarding the disconnect between the skills employers seek and the skills the workforce can deliver.

Despite struggles with unemployment, approximately four million jobs are currently unfilled in the U.S. As the graph below shows, jobs are available in sectors experiencing unemployment. The data suggests an inefficient matching of worker and employer. 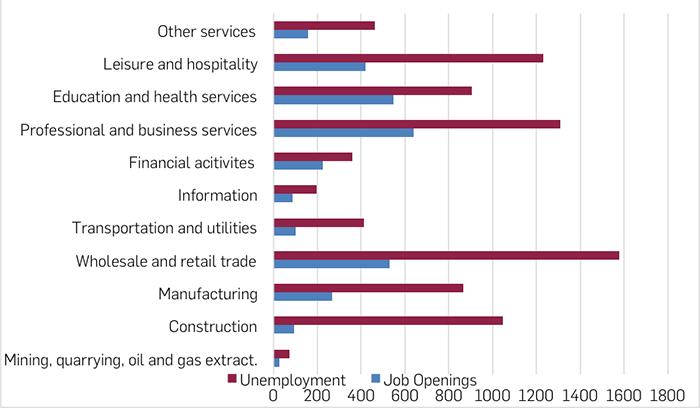 On the OECD’s Programme for the International Assessment of Adult Competencies (PIAAC), a practical skills assessment, Americans generally scored below the OECD average. For all three categories, the difference between the OECD average and the average score of Americans was greatest for the lowest age groups, suggesting that the U.S.’s youngest generation is not as globally competitive as its predecessors.

PIAAC tested respondents on their problem solving skills in technology-rich environments. Young Americans’ low scores compared to their OECD counterparts is disconcerting given the growing importance of technological savvy in the new global economy.

Percent of Respondents Scoring High on Problem Solving by Age

The majority of PIAAC countries scored above the U.S. with regard to problem solving in technology-rich environments.