Who’s #TweetTalking about Tunisia and Democracy?

Summary of a TweetTalk hosted by Concordia and the National Democratic Institute leading up to the 2016 Concordia Summit.

P-Cubed: Elevating the Power of Partnerships

by Emily Malina, Project Assistant at the National Democratic Institute

This blog was originally posted on NDI’s DemWorks blog.

In 2010, citizens of Tunisia, Egypt, Libya, Jordan, Bahrain, Morocco and Syria emerged onto the streets to demonstrate their economic, social and political discontent in their respective countries. The Arab Spring, a tsunami of events that transformed some governments and left others in a similar state as before, had begun. Tunisia, the first country to feel its ground shake in protest, has since seen gradual success from its transition into a peaceful democracy five years ago. While Tunisia has experienced several successes along its path to democracy, it still faces economic and systemic challenges such as unemployment, non-diversification of resources, accountability and regional inequalities.

Just weeks before the annual Concordia Summit in New York, NY on September 19th and 20th, the National Democratic Institute and Concordia partnered to host a TweetTalk as an extension of the panel, “Helping Democracy Deliver: Tunisia as an Example of Economic and Political Transition.”  Like the panel, the TweetTalk aimed to explore themes like extremist activity in Libya as a threat to Tunisian progress, and whether decentralization can address regional inequalities.

Can political reform change the built-in advantages that help the economic elite while driving small entrepreneurs to the gray and black markets?
Are the Tunisian unions playing a constructive role in economic reform?
How is the government addressing private sector job creation?
Which political reforms are necessary to address the issues of unemployment, poverty and inequality in Tunisia?
To what extent does the rise of extremist activity in Libya threaten the progress Tunisia has made?

#Tweeters like Les Campbell, NDI Middle East and Northern Africa Regional Director and Concordia Summit, and Daniel Hajjar, Lead Communications Officer at the Tahrir Institute, offered their 140 character expertise during the TweetTalk. When asked if political reform could shift the economic advantage of the Tunisian elite, @_LesCampbell and @DanielGHajjar agreed that the government played an important role in regulating those that benefit largely from economic activities, many of whom normally have government ties.  Daniel Hajjar relayed the importance of reconstructing ideas surrounding “failure,” and that the government should be supportive of such a cultural reform.

Civic Tech Leaders, a new organization formed to connect leaders leaders from the United States and the Middle East to improve governance through innovation and collaboration, also gave its opinion on government accountability in the marketplace:

When asked about the role of Tunisian unions in job creation, @_lescampbell made the point that unions have played an important role — especially since they were a main leader in the Arab Spring. Tunisian unions still maintain an important role, but are strongly invested in the status quo, making the modernization in labor laws a difficult feat.
Private sector involvement, #Question3, proved to be a topic that intertwined itself into #Question4 of the TweetTalk, which asked what political reforms are necessary to further job creation and stabilize Tunisia’s economy. @_lescampbell noted that private sector investments normally exceed 25% of  a country’s GDP but lingers at 15% in the case of Tunisia. Many #TweetTalkers agreed that the private sector can generate more job creation, but there must be collaboration between the government, civil society organizations and citizens. Daniel Hajjar added his sentiment to Les Campbell’s remarks  on increased unemployment within Tunisian youth’s correlation with extremism:

NDI wrapped up the TweetTalk by asking our participating experts about Libya’s role in extremist activity and what could be done to amend the relationship between Tunisia and Libya. @ConcordiaSummit and @_Les Campbell agreed that fostering dialogue between the two countries is crucial. Together the countries could build their democracies by educating their populaces and fortifying their economies. 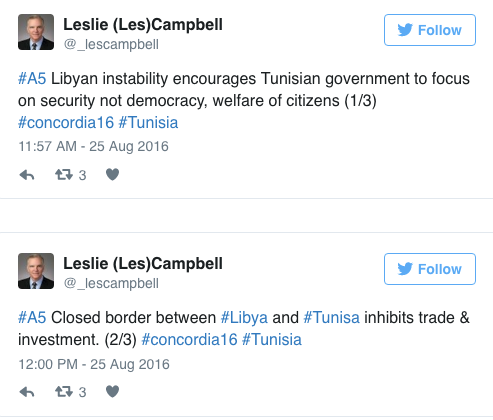 Concordia Summit also added that the private sector could play a part in decreasing extremism:

Facebook, technology-savvy election monitoring groups and new startups have played a large role in advancing Tunisia’s economic development. With this new tech culture emerging in Tunisia, the country’s hope for a more expansive social and political change remains bright. Experts, such as the former Prime Minister of Tunisia, Ali Larayedh, will engage in a lively discussion on democracy in Tunisia at the 2016 Concordia Summit. Stay informed on this discussion  and a wide range of pressing issues being covered at the 2016 Concordia Summit on September 19 and 20th by following #concordia16.

Missed the  TweetTalk on #Tunisia? You can still get the full story here: