This modern concept of a European Union is being tested early in this 21st Century. From the impacts of the burgeoning refugee crisis, to the rise of populist parties, to the British exit from the EU, the future of the Union remains uncertain. While many obstacles to overcoming these challenges persist, cross-sector collaboration lends itself to more efficient allocation of resources to address these issues and implement viable solutions to achieve the Sustainable Development Goals (SDGs).

The Concordia Europe Summit took place at a pivotal time for the continent, following significant shifts in regional leadership that will continue throughout 2017. As the popular vote has become far less predictable than ever before, elections in Italy, France, Germany, and elsewhere are affecting not only on citizen populations, but also universal human rights, global markets, migrant populations, and regional investment climates. Concordia believes that public-private partnerships (P3s) have great potential for impact in Europe as it works to preserve a modern-day union, quell a mounting refugee crisis, and reignite regional economic growth while remaining on the path to achieving the SDGs by 2030. By convening regional leadership to address these challenges and formulate practical solutions, Concordia provided a platform for the exchange of ideas and brokered new relationships across the public, private, and nonprofit sectors. 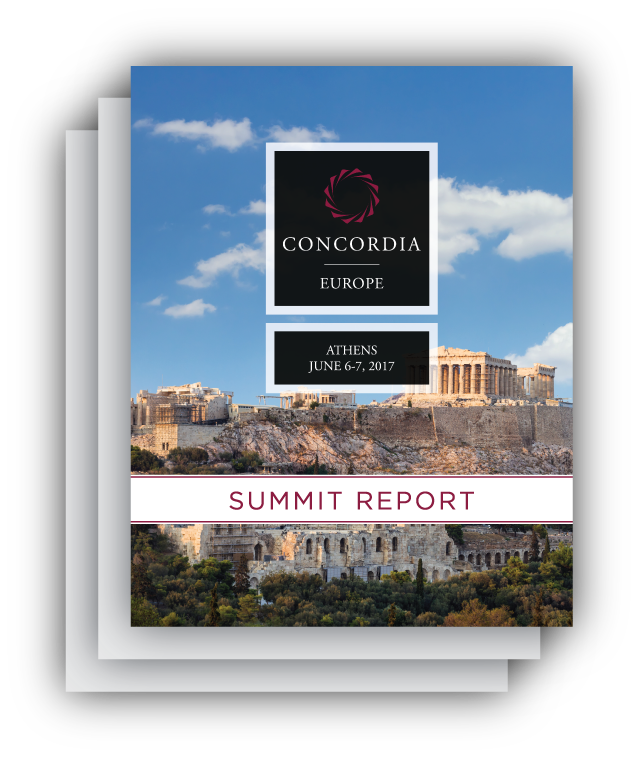 For a full breakdown of the 2017 Concordia Europe Summit in Athens, please view our Post Summit Report. With session descriptions, overviews, quotes, and key takeaways, this report aims to be a building block to the discussions that will take place at the 2017 Concordia Annual Summit hosted in New York City in September 2017. 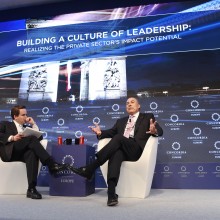 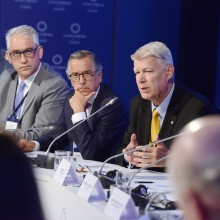 Trade between the United States and the European Union is currently the largest bilateral trade relationship in the world, totaling $1.1 trillion in 2014. This trans-Atlantic trade route not only accounts for billions of dollars a day in goods and services, but millions of jobs across both continents. Concordia will host a fireside chat with former President of the European Commission and former Prime Minister of Portugal, José Manuel Barroso, to discuss aspects of, and opportunities for, the economic relationship between the United States and the European Union. This conversation will include an analysis of what has contributed to the robustness and strength of the world’s largest trade relationship and what lies ahead as technology, innovation, power dynamics and politics continue to change in our increasingly interconnected world.

An organization’s potential for social impact is largely influenced by the corporate ethos and values cultivated by its leadership. Balancing needs to meet market demands and remain competitive, while also integrating sustainable busi-ness practices, is no easy task. In this session, Muhtar Kent, Chairman of The Coca-Cola Company, will reflect on lessons learned from his tenure as the CEO of a renowned multinational organization and posit recommendations for the pri-vate sector to rise to the challenge presented by the U.N. Sustainable Development Goals by 2030.

When developing public-private partnerships (P3s) for social impact, organizations aim to facilitate innovative programs that are sustainable and scalable beyond the local level. In this session, the Athens Partnership in Greece and My Brother’s Keeper Alliance in the United States will be highlighted as case studies of organizations promoting the value of strong cross-sector collaboration, which can spark innovation and help local, national, and global leaders alike to rethink their path to social and economic impact. In addition to the essence of public-private partnerships, speakers in this session will also discuss the importance of community engagement in public improvement projects, the power of digital technology, and the ability to improve education outcomes and workforce development through early intervention.