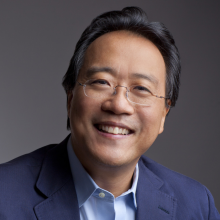 In 1998, Yo-Yo Ma established Silkroad, a nonprofit organization that seeks to create meaningful change at the intersections of the arts, education, and business.  Under his artistic direction, Silkroad presents performances by the acclaimed Silk Road Ensemble and develops new music, cultural partnerships, education programs, and cross-disciplinary collaborations. More than 80 new musical and multimedia works have been commissioned for the Silk Road Ensemble from composers and arrangers around the world. Silkroad’s ongoing affiliation with Harvard University has made it possible to develop programs such as the Arts and Passion-Driven Learning Institute for educators and teaching artists, held in collaboration with the Harvard Graduate School of Education, and a new Cultural Entrepreneurship initiative in partnership with Harvard Business School.

Mr. Ma is also widely recognized for his strong commitment to educational programs that bring the world into the classroom and the classroom into the world. While touring, he takes time whenever possible to conduct master classes as well as more informal programs for students – musicians and non-musicians alike. He has also reached young audiences through appearances on “Arthur,” “Mister Rogers’ Neighborhood” and “Sesame Street.”

Mr. Ma’s discography of over 100 albums (including 18 Grammy Award winners) reflects his wide-ranging interests.  His recordings include “Appalachia Waltz” and “Appalachian Journey” with Mark O’Connor and Edgar Meyer, and two Grammy-winning tributes to the music of Brazil, “Obrigado Brazil” and “Obrigado Brazil – Live in Concert.” Mr. Ma’s recent recordings include: “The Goat Rodeo Sessions,” with Edgar Meyer, Chris Thile and Stuart Duncan, which received the 2013 Grammy for Best Folk Album, and “Songs from the Arc of Life,” with pianist Kathryn Stott.  His most recent release, “Sing Me Home,” recorded with the Silk Road Ensemble, was released in April 2016 as the companion album to documentary film The Music of Strangers. In spring 2017, Mr. Ma will release and tour “Bach Trios,” recorded with Edgar Meyer and Chris Thile.

Yo-Yo Ma was born in 1955 to Chinese parents living in Paris. He began to study the cello with his father at age four and soon came with his family to New York, where he spent most of his formative years. Later, his principal teacher was Leonard Rose at The Juilliard School. He has the Avery Fisher Prize (1978), the National Medal of Arts (2001), and the Presidential Medal of Freedom (2010).  In 2011, Mr. Ma was recognized as a Kennedy Center Honoree.  He serves as a UN Messenger of Peace.  He has performed for eight American presidents, most recently at the invitation of President Obama on the occasion of the 56th Inaugural Ceremony.

Mr. Ma and his wife have two children. He plays two instruments, a 1733 Montagnana cello from Venice and the 1712 Davidoff Stradivarius.