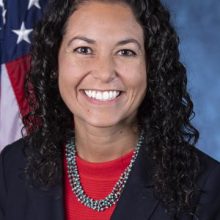 Under Secretary for Rural Development, U.S. Department of Agriculture

Before coming to Rural Development, Xochitl was a United States Representative for the fifth largest district in the country. In the midst of the COVID-19 crisis, Xochitl kept a rural hospital from closing its doors, improved constituent access to healthcare over the phone, and helped secure tens of millions of dollars for broadband in New Mexico through USDA’s ReConnect Program. Prior to the coronavirus pandemic, Xochitl raised the alarm on broadband disparities, serving on Majority Whip James Clyburn’s Rural Broadband Taskforce and as an original cosponsor of the Accessible, Affordable Internet for All Act. As a member of the House Agriculture Committee, Xochitl helped champion the needs of dairy farmers and sponsored legislation to help local producers and rural communities invest in infrastructure to navigate new markets. Xochitl forged additional bipartisan solutions on the House Armed Services Committee and as chairwoman of the Oversight, Management, and Accountability subcommittee of the House Homeland Security Committee.

Xochitl was the first woman and first person of color to represent New Mexico’s second congressional district. The granddaughter of farmworkers, Xochitl Torres Small grew up in the borderlands of New Mexico. She came home from college to work as a field organizer, working in colonias in southern New Mexico. She continued serving rural New Mexico as a field representative for Senator Tom Udall, where she collaborated with local grassroots leaders, business owners, elected officials, and regional and state economic development officials to help communities rebound from the Great Recession. Inspired by Senator Udall’s work on water in the West, Torres Small studied water law and worked closely with rural water utilities. After law school, she returned home to clerk for United States District Court Judge Robert C. Brack. Throughout her career, Xochitl has employed her experience working in vulnerable, rural communities to achieve lasting investments that combat persistent poverty. Xochitl has a law degree from the University of New Mexico School of Law, an undergraduate degree from Georgetown University’s School of Foreign Service, and an international baccalaureate from Waterford Kamhlaba United World College of Southern Africa. She’s happily married to her husband, New Mexico State Representative Nathan Small.