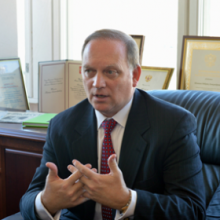 He holds a PhD from George Mason University’s Department of Molecular and Microbiology; an MPA from Harvard’s John F Kennedy School of Government and a Bachelor of Science from the United States Air Force Academy where he was a distinguished military graduate and class president.

An award-winning author, Dr. Parker has published over thirty articles and co-authored the book Jihadist Strategic Communication. His latest book, Guaranteeing America’s Security in the Twenty-First Century, was released in December, 2016. He appears in the 2016 Emmy nominated documentary, Sonic Sea. Dr. Parker is an accomplished speaker and frequent guest commentator in global media on issues of national security and the global economy. He has lectured at several dozen national and international venues to include: The Hague, The International Counter Terror Symposium at Windsor Castle in London, Columbia University, Tufts University, Columbia Law School, New York University, Harvard University, Bard College, the College of Charleston, the Armed Forces Staff College, the University of Moscow, the Spanish War College, numerous Turkish Universities and dozens of other colleges and universities worldwide. He has guest lectured at the Council on Foreign Relations, where he is a life member and former Fellow. Dr. Parker has addressed the media in more than thirty nations, to include live air time on Fox News, National Public Radio, Al Jazeera, Patriot Radio, Voice of America and numerous other radio and television talk shows.

Parker is a retired senior U.S. naval officer who is a qualified military parachutist and Surface Warfare Officer with a long list of awards, including the Bronze Star, three Legions of Merit and Department of State Meritorious Honor award. During nearly three decades in uniform, he commanded three warships, and later, a squadron of warships. He was the 2009 recipient of the Vice Admiral James Bond Stockdale Award for Inspirational Leadership; and was selected to serve as the U.S. Navy’s Military Fellow at the Council of Foreign Relations. He also served as the Chief of Staff for U.S. Naval Forces. In addition to multiple combat
tours, he held the post of senior advisor and strategist with U.S. embassies in Iraq and Pakistan.