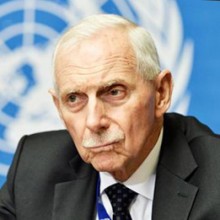 In December 2009, the American Academy of Diplomacy awarded Ambassador Swing the Annenberg Award for Excellence in Diplomacy. Ambassador Swing has also been awarded the Presidential Certificate of Commendation; the Secretary of State’s Distinguished Service Award; and the Department of State Award for Valor. Ambassador Swing is also recipient of: the Presidential Distinguished Service and Meritorious Honor Awards; Superior Honor Award; the US Coast Guard’s “Distinguished Public Service Award;” the US Information Agency’s Meritorious Honor Award; several honorary doctorates; and a foreign government decoration. On 26 June 2012, in a ceremony at the US Department of State, Ambassador Swing received the American Foreign Service Association’s award for «Lifetime 2 Contributions to American Diplomacy”. On 26 June 2013, he was made an honorary fellow of Harris Manchester College, University of Oxford, and received the Order of Merit of the Federal Republic of Germany, 1st Class, in November 2014, from the Federal President of Germany.

William Lacy Swing was born in 1934 in Lexington, North Carolina. He graduated from Catawba College (BA 1956) in North Carolina, and Yale University (BD, 1960) and did postgraduate studies at Tübingen University, Germany. He taught at a private German boarding school before entering the Foreign Service. Ambassador Swing speaks French and German. He is married to Yuen Cheong, and has a son, Brian, who lives in Cape Town, South Africa, and a daughter Gabrielle, who is a United Nations peacekeeper in Afghanistan.