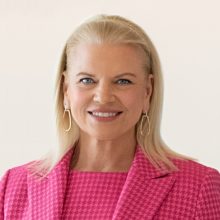 Ginni became CEO of IBM in 2012 and retired form the company on December 31, 2020. During her tenure she made bold changes to reposition IBM for the future, investing in high value segments of the IT market and optimizing the company’s portfolio. Under Ginni’s leadership, IBM built out key capabilities in hybrid cloud, data and AI, quantum computing, security, and industry expertise, both organically and through acquisition. IBM acquired 65 companies during Ginni’s tenure as CEO, including Red Hat, the largest acquisition in the company’s history. She reinvented more than 50 percent of IBM’s portfolio, built a $21 billion hybrid cloud business and established IBM’s leadership in AI, quantum computing and blockchain, while divesting nearly $10 billion in annual revenue to focus the portfolio on IBM’s high-value, integrated offerings.

Ginni also established IBM as the model of responsible stewardship in the digital age. She was the industry’s leading voice on technology ethics and data stewardship, working relentlessly to safely usher new technologies into society. She enabled people of diverse backgrounds and education levels to participate in the digital economy by building talent, skills and opportunity for disadvantaged populations. Under her leadership, IBM created thousands of New Collar jobs and championed the reinvention of education around the world, including the explosive growth of the six-year Pathways in Technology Early College High Schools, or P‑TECHs, which are helping prepare the workforce of the future, serving hundreds of thousands of students in over 240 schools and 28 countries. She also helped to redefine the purpose of the corporation through her work with the Business Roundtable, expanding corporate commitments to include a wide range of stakeholders, from customers to communities.

IBM also achieved record results in diversity and inclusion under Ginni’s leadership. This included extending parental leave and making it easier for women to return to the workforce through a ‘returnships’ program with hands-on work experience in emerging technologies. This pioneering work was recognized in 2018 by the prestigious Catalyst Award for advancing diversity and women’s initiatives. IBM is the only tech company to have earned this recognition in the past 20 years and the only company ever to be honored four times.

Beginning her career with IBM in 1981, Ginni held a series of leadership positions across the company and led the successful integration of PricewaterhouseCoopers Consulting, creating a global team of more than 100,000 business consultants and services experts.

Ginni has a Bachelor of Science degree with high honors in Computer Sciences from Northwestern University, where she later was awarded an honorary degree. She also has honorary degrees from Rensselaer Polytechnic Institute and North Carolina State University.