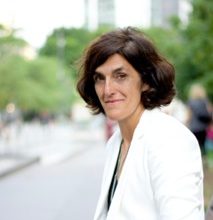 Véronique Lamontagne
Lawyer, Advisor in the International Relations Office on climate and migration, City of Montréal

At the City of Montreal since 2016, she has been Acting Director of the Office of the Integration of Newcomers – BINAM (November 2017 to May 2018) as well as an Advisor on migration and climate issues for the International Relations Office (2016-ongoing). As part of her relaization, since she joined the city, she prposed a position paper signed and submitted to the United Nations by 136 member cities of Metropolis as well as over 15 US cities. At the BINAM, she delivered the City of Montreal strategic framework for inclusion and integration.

Prior to joining the City of Montreal, she gained over 20 years of experience as a lawyer in international development in the field of governance, rule of law and human rights. She conducted numerous mandates in strategic planning, managing, monitoring and evaluation of international development program in over 15 countries for Canadian International Development Agency, universities, NGOs/INGOs as well as international and multilateral organisations including United Nations and the Francophonie.

She also has additional experience in immigration as an administrative judge at the Immigration and Refugee Board of Canada (IRB) as well as an immigration lawyer.

Migrations, inclusion and international development are at the heart of her professional commitment.