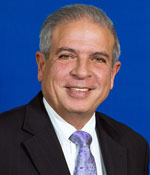 Mayor of the City of Miami

Born in Havana, Cuba, May 24, 1947 Tomas Pedro Regalado was the first born child of Tomas Regalado Molina and Carmen Rita Valdez de Regalado. The son of an attorney/journalist who was the last president of the Cuban Association of Journalist and Reporters and a political prisoner for over twenty two (22) years, his father’s absence was a constant reminder to Tomas of the responsibilities and sacrifices of the Forth Estate.

Prior to leaving Cuba, Tomas attended elementary school at La Salle Catholic School in Havana. In April of 1962, at the age of fourteen (14) Tomas and his younger brother Marcos were placed on a flight to Miami, Florida as participants of the Peter Pan Project. The two brothers lived at the boys’ camp in Kendall and then Florida City for several months until their aunt, Silvia Valdez claimed them. They lived with her until their mother Carmen Rita Valdez de Regalado arrived in Miami a year later.

In Miami, Tomas attended high school at La Salle in Coconut Grove and then at the Lindsey Hopkins vocational school while working full time to support his mother and younger brother. At the age of seventeen, Tomas spent what little free time he had as an unpaid intern at WFAB, La Fabulosa. Determined to be a journalist he had a day job, attended seminars at the University of Miami Koubek Center for journalism and continued volunteering at the radio station.

Tomas became the youngest reporter on staff at WFAB, La Fabulosa. Regalado quickly ascended from reporter to assistant producer. At twenty one, Regalado was hired by WCKT an NBC affiliate as the Latin American News Editor and host of the news program Tele-Amigo. After two years at WCKT then Channel 7, Tomas returned to WFAB as a news producer and anchor. He continued in Spanish language radio and married a fellow radio commentator, Raquel Ferreiro in 1972 at St. Hugh Catholic Church in Coconut Grove.

Tomas and Raquel had three children: Tomas, Raquel and Jose Francisco and were married for thirty seven (37) years. Raquel passed away at Mercy Hospital on February 3, 2008. Mayor Regalado is currently married to Mrs. Ana Cristina Regalado.

In 1974, Tomas became a reporter for WLTV Channel 23 but returned to radio in 1977 as the News Director in charge of all programming for La Fabulosa, WFAB. In 1970, Regalado decided to leave the news desk and became the stations first international news correspondent. In the years that followed, Regalado traveled to Africa and covered the civil war in Angola, the riots in Soweto, South Africa and the civil war in Mozambique.

In 1979, Tomas’s father, Tomas Regalado Molina was released from prison thanks to the intercession of the then President of Costa Rica Rodrigo Caraso. Regalado senior lived in Miami from 1979 until his death in the fall of 1995. Regalado senior worked alongside his son and daughter-in-law as a producer and news editor at WRHC, the Cadena Azul. Regalado Molina was a contributor to el Diario de las Americas and El Nuevo Herald until his sudden death in 1995 at the age of seventy four. Tomas’s mother, Carmen Rita passed away soon after in 1998.

In 1983, Tomas, who was no stranger to the White House and had interviewed Presidents Richard Nixon, Gerald Ford and Jimmy Carter and he became the first Cuban American member of the White House Press Corps. As a member of the Press Corps, Regalado traveled with Presidents Ronald Reagan, George Bush Sr. and Bill Clinton. Regalado accompanied the presidents on their foreign trips, including but not limited to summits from 1983 to 1993 and met such figures as Mikhail Gorbachev, Boris Yeltsin and Anwar Al Sadat. In this time period, Regalado also covered the presidential campaigns and national party conventions.

In 1986, Regalado was approved as an applicant to NASA’s Journalist in Space Program which was canceled after the Challenger explosion. While a full time News Director on Spanish language radio Regalado also worked for El Miami Herald as a weekly columnist. He covered the civil war in Nicaragua and El Salvador and has visited over 78 countries throughout the world. Along with his wife Raquel, Tomas spoke several times before the Human Rights Commission of United Nations in Geneva Switzerland against human rights violations in Cuba.

In September of 1996, Regalado was elected, City wide, as Commissioner. One week after his election, the City of Miami’s economic crisis was exposed by Operation Green Palm and an oversight board was installed.

Regalado was re-elected in 1999, and then again in 2003 without opposition. In his last election in 2007, Tomas was re-elected by ninety-four percent (94%) of his district. While a City of Miami Commissioner, Regalado kept his day job as the News Director for Spanish Broadcasting Systems, a daily host and commentator on WWFE la Poderosa and a host of a daily news program on the Cable Network TeleMiami.

Tomas Regalado is the proud grandfather of Isabela Maria Herrera who is eleven, Sebastian Karol Herrera who is ten, Tomas Manuel Regalado who is five and Nicholas Regalado who is three years old. His son Tomas N. Regalado is a producer at TV Marti. His daughter Raquel Regalado is an attorney and member of Miami-Dade School Board. She is currently a candidate for Mayor of Miami-Dade County. And his youngest son, Jose Francisco is a college graduate in International Relations from Florida International University.

On November 3, Tomas P. Regalado was elected Miami’s 33rd Mayor with a 72% margin. Keeping to his promise to lead by example in a time of economic emergency, Regalado has become a full-time Mayor, renounced the monthly eight-hundred dollar car allowance and cut his salary by fifty three thousand ($53,000).

During his first tenure as Mayor, he had to cope with the economic crisis that hit the whole nation and satisfactorily balanced three consecutive budget deficits amounting to $110 million (21%) in the first year, $62 million (12%) in the second year, and $40 million in the third year. In his fourth year the City had no deficit.

Regalado was able to raise the reserves of the City, an important asset, from the $13.4 million he received in 2009 to $75 million in his fourth year. The reserves are currently in a solid $100 million.

Mayor Regalado was been able to deal with the economic crisis and pave the way of an increasing recovery by putting together a team of professionals in the fields of finance and budget with an accumulated experience of 50 years.

Regalado also created the first Health Guide for the residents of the City. In collaboration and with the sponsorship of Pfizer Helpful Answers, the Health Guide connected the uninsured and underinsured to affordable health care resources throughout Miami.

Besides the economic recovery of the City, his policy of reducing taxes became source of attraction for new investments, especially in the field of real estate. These new investments have allowed a consistent recovery in the industry of construction and have reduced the rate of unemployment.

In November 2013 Tomas Regalado was reelected Mayor of Miami and continued his excellent leadership in the fields of budget and finance and reduced taxes for the fourth year in a row. The principal credit rating agencies has also raised their outlook on various City of Miami bonds to a now positive outlook.

Another important success of Mayor Regalado has been the implementation of a Trolley system of transportation. Since March, 2012, it has grown to six routes, 28 busses, and moving around six thousand passengers daily. The trolleys have air-conditioned and are fare-free. The trolleys have come as a great help for the historical deficiency of the public transportation system in the whole county.

Mayor Regalado’s latest success was the approval of the City as an EB-5 Regional Center by the U.S. Citizen and Immigration Services. This accomplishment, in and of itself, speaks to the City’s creativity, focus, and clarity of purpose, as well as to the commitment to create a model that is accountable, transparent and inclusive. This Regional Center shall attract foreign investment to the City in exchange for a permanent resident status for investors of over half a million dollars which create, at least, ten permanent full time jobs for over two years.

Under Mayor Regalado’s leadership, the City has also been awarded several certificates for excellence in financial reporting by the Government Finance Officers Association of the United States and Canada.