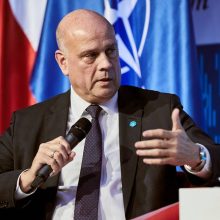 Thomas E. Garrett has worked in the field of politics and advocacy for more than three decades. Most recently, he supported reformers and democrats across the world with his work at the International Republican Institute (IRI), a nonprofit, nonpartisan organization that supports democracy, civil society, women and youth political empowerment and democratic governance in more than 80 countries.

He left the region in January 2000 to serve as IRI’s resident advisor to the Ikh Hural, Mongolia’s parliament, based in Ulaanbaatar. In October 2000, Garrett moved to Indonesia to oversee a program of political party building, public opinion research and support to local government. He concluded his 11 years in the field following the Indonesian elections of 2004.

Returning to Washington, D.C., Garrett was IRI regional director for the Middle East and North Africa, responsible for 11 country programs. In 2009, he was made IRI vice president for programs, overseeing a global portfolio of more than 200 staff in offices in 32 countries.

An enrolled member of an American Indian tribe, the Chickasaw Nation, Garrett moved to Washington, D.C. to join the Federal government to work in support of indigenous rights. He served as a legislative assistant for Alaska Native and American Indian issues in the U.S. Senate in 1994. Before that, as a political appointee in the government of President George H.W. Bush, Garrett was a Special Assistant to the Assistant Secretary of Indian Affairs and then director of the Office of Legislative Affairs at the Bureau of Indian Affairs.

In 2017, the Government of Mongolia conferred the Order of Friendship on Garrett for his work in support of Mongolian democracy. His master’s degree is in diplomacy and international relations and his undergraduate degree is in political science.