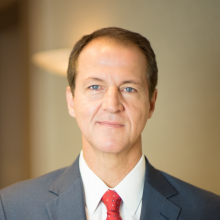 Tim Phillips has served as president of Americans for Prosperity since 2006. Americans for Prosperity (AFP) has enjoyed rapid growth, going from nine state chapters in January of 2006 to 35 state chapters with fulltime staff on the ground, with more than 2.4 million grassroots activists in 50 states, who are fighting for free-market principles and policies at the state, national, and local levels. The combined budget of AFP and AFP Foundation has also grown from just under $3 million in 2004 to over $120 million annually.
AFP helped lead the successful effort defeating Cap-and-Trade and card check while also diligently opposing the Washington, D.C. takeover of our health care system through their “Hands Off My Health Care” effort. During 2012 AFP mounted one of the most aggressive grassroots field operations the conservative movement has ever mounted in states like Indiana, Florida, Ohio, Colorado, Nebraska and Montana as staff and volunteers knocked on hundreds-of-thousands of doors and made millions of personalized phone calls opposing the big government policies of President Obama and other left-wing politicians.
At the state level, AFP staff and volunteers consistently fight for free market policies. They were seen as a key leader in supporting Governor Scott Walker’s budget reforms in Wisconsin, the successful Right to Work legislation in Michigan, and reform-minded budgets in states like North Carolina and Florida. Their goal at the state level: provide the long-term grassroots infrastructure, funding and grassroots strength necessary to take on entrenched special interests to pass free market, smaller government policies.
Tim is a veteran political strategist and one of the nation’s premier grassroots organizers with 28 years of experience, including presidential, gubernatorial and congressional races, as well as, state legislative, local and issue-advocacy campaigns. In 1992, Tim managed U.S. Rep. Bob Goodlatte’s (R-VA) first congressional campaign and later served as Rep. Goodlatte’s chief of staff on Capitol Hill for four years. In 1997, Tim helped found Century Strategies, one of the nation’s leading public affairs, political consulting and public relations firms. He was named a “Rising Star in Politics” in 1998 by Campaigns and Elections Magazine. In 2012, Tim was named one of Politico’s top 25 public policy players. Tim and his wife, Julia, have been married for 31 years, and are the proud parents of four children.