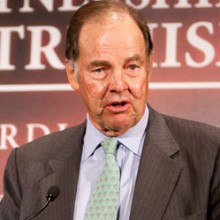 Thomas Kean served two terms as governor of New Jersey from 1982 to 1990. As governor, he served in the President’s Education Policy Advisory Committee and as Chair of the Education Commission of the States and the National Governor’s Association task force on teaching.

After completing his second term as governor, Kean was appointed President of Drew University, where he served until 2005. Kean is also the former Chairman of the National Commission on Terrorist Attacks against the United States. Following the 9/11 attacks, Kean was appointed by President George W. Bush to head this commission which was responsible for investigating and publishing The 9/11 Commission Report, which provided recommendations to prevent future terrorist attacks. The Commission is widely considered the most important independent U.S. government organization given its mammoth responsibility for investigating the causes of the first foreign attack on the U.S. mainland since 1812. The disclosure of their final report drew substantial global attention.

Governor Kean also served for ten years in the New Jersey Assembly, the National Endowment for Democracy. He is chair of the Newark Alliance and the National Campaign to prevent teen pregnancy and former chair of the Carnegie Corporation of New York.

Governor Kean is on the board of a number of organizations including the Robert Wood Johnson Foundation and the National Council of the World Wildlife Fund.

He holds a B.A. from Princeton University and an M.A. from Columbia University Teachers College, as well as more than 25 honorary degrees and numerous awards from environmental and educational organizations.