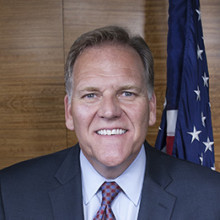 As a former member of the U.S. Congress representing Michigan’s Eighth Congressional District, member of the U.S. Army and FBI special agent, Mike Rogers is in a unique position to shape the national debate on a wide variety of issues. Mike currently uses his insider perspective gained from travelling the globe – from the Middle East to South America – to host the nationally-syndicated “Something to Think About with Mike Rogers” on Westwood One.

From his time in the U.S. House of Representatives, where he chaired the powerful House Intelligence Committee and was a member of the Energy and Commerce panel, Mike built a legacy as a tireless and effective leader on cybersecurity, counterterrorism and national security policy. Washington Post columnist David Ignatius remarked, Mike was “a rare example of bipartisanship.”

Mike has worked with two presidents, Congressional leadership, and countless foreign leaders, diplomats and intelligence professionals to ensure the brave men and women who fight for our nation are equipped with the resources necessary to get the job done.

Mike is a CNN national security contributor and a regular in the major print outlets such as The New York Times, The Washington Post, The Wall Street Journal and the Associated Press. He is a staple on radio and appeared more on Sunday shows than any other elected official in 2013 and 2014.

In addition, Mike is a Distinguished Fellow at the prestigious Hudson Institute and serves on the Board of Trustees at the Center for the Study of the Presidency and Congress.
Mike is a 1985 graduate of Adrian College. He is married to Kristi Rogers and has two children.