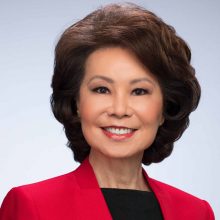 As Secretary of Labor, Secretary Chao focused on increasing the competitiveness of America’s workforce in a worldwide economy. She set new records in workplace safety and health, compensation and retirement security. Secretary Chao immigrated to the United States when she was 8 years old not knowing how to speak English. She received her citizenship at the age of 19. It was her experience transitioning to a new country that motivated her to ensure that everyone has access to the opportunities in our country.

Prior to Secretary of Labor, Secretary Chao was President and CEO of United Way of America where she restored public trust and confidence to an organization tarnished by controversy and scandal. She was also Director of the Peace Corps where she launched the first Peace Corps programs in Ukraine, Baltic states, and other former republics of the former Soviet Union. Secretary Chao began her public service as a White House Fellow working at the White House. She then served as Deputy Maritime Administrator, U. S. Department of Transportation; Chair of the Federal Maritime Commission; and Deputy Secretary of the U.S. Department of Transportation. She has also been Vice President of Syndications at BankAmerica Capital Markets Group in San Francisco and a shipping banker with Citicorp in New York City.

Secretary Chao has served as director of numerous public companies while out of government including News Corp, HCA Healthcare, Wells Fargo, Dole Food Company. She currently serves on the boards of Kroger and a number of new economy technology companies in the mobility sector. She is also a director on many nonprofit boards, including Harvard Business School Board of Dean’s Advisors, Global Advisory Board and a trustee of the Kennedy Center for the Performing Arts. Secretary Chao earned her M.B.A. from Harvard Business School and is the recipient of 37 honorary degrees. Secretary Chao is a resident of Jefferson County, Kentucky.