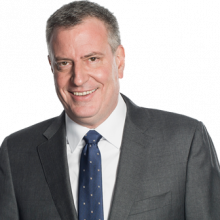 Since assuming office in 2014, the de Blasio Administration has developed and executed transformative initiatives including Pre-K for All; Paid Sick Leave; neighborhood policing; IDNYC; and Housing New York, the largest, most ambitious affordable housing plan in the nation.

Driven by over three decades of activism and experience working in government, Mayor de Blasio has fought to address quality of life and public safety issues throughout the city.

Under his leadership, the city has experienced historic lows in crime while ending its overuse of stop-and-frisks; implemented neighborhood policing to bring police and communities closer together, created HOME-STAT, the largest homeless outreach effort in the nation; and developed the Vision Zero plan aimed at ending pedestrian traffic deaths.

Mayor de Blasio has made deep investments in the NYPD, providing 21st century technology and resources to bolster crime-fighting efforts. Thanks to new training, smartphones and tablets, the ShotSpotter gunshot detection system and the deployment of an elite counterterrorism unit – New York City is safer than ever.

At NYCHA, the Mayor is making historic investments to address decades-old repairs, stabilize the authority’s finances, and give 400,000 residents the quality of life they have long deserved. In a first, the mayor is also bringing free, high-speed internet to NYCHA to help close the digital divide. That comes in addition to the city-wide launching of LinkNYC, the largest and fastest free municipal Wi-Fi network in the world.

Mayor de Blasio has been an outspoken progressive voice on key national issues that touch the lives of his fellow New Yorkers including immigration reform, fair trade agreements, gun laws, transportation infrastructure and climate change. New York City is now the largest city in the world committed to cutting emissions 40 percent by 2030 as part of a broader goal to reduce emissions 80 percent by 2050.

Bill de Blasio was born on May 8, 1961 in Manhattan and raised in Cambridge, MA. He is a graduate of New York University and Columbia University’s School of International and Public Affairs.

Mr. de Blasio began his career in public service in 1989 as part of David N. Dinkins’ successful and historic mayoral campaign. He then worked as a junior staffer in the Dinkins Administration.

Over the next decade, Mr. de Blasio served as regional director at the U.S. Dept. of Housing and Urban Development under then-Housing Secretary Andrew Cuomo; as a school board member for Brooklyn School District 15; and as head of Hillary Rodham Clinton’s successful and historic campaign in 2000 for the U.S. Senate.