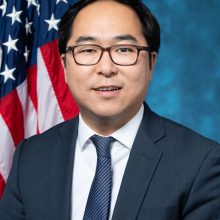 Congressman Andy Kim was first elected to the U.S. House of Representatives in 2018. He represents the Third Congressional District of New Jersey, which stretches from the Delaware River to the Jersey Shore encompassing most of Burlington County and parts of Ocean County.

As a member of the House, Congressman Kim serves on the House Armed Services Committee, the House Foreign Affairs Committee and the House Committee on Small Business.

In his first term, Congressman Kim passed bills into law that help military servicemembers and their families find economic opportunities and stopped the use of harmful chemicals that impact New Jersey’s water by the U.S. military. In addition, Congressman Kim has held more than two dozen town halls and has helped constituents by resolving more than 4,300 issues with federal agencies.

Prior to serving in the House, Congressman Kim worked as a career public servant under both Democrats and Republicans. He served at USAID, the Pentagon, the State Department, the White House National Security Council, and in Afghanistan as an advisor to Generals Petraeus and Allen.

Congressman Kim grew up in South Jersey, the proud son of Korean immigrants, where he attended public K-12 schools before becoming a Rhodes Scholar.